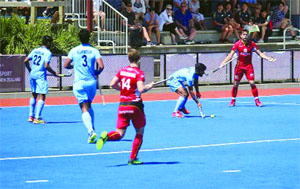 Agencies, Tauranga (New Zealand) Belgium held on to a 2-1 lead till the last hooter to beat India in a dramatic Final here at the Four Nations Invitational Tournament at the Blake Park on Sunday.It was Tom Boon (4’) and Sébastien Dockier (36’) who scored in Belgium’s victorious outing while Mandeep Singh (19’) was India’s lone goal scorer. Belgium were quick to get off the block, as they won a PC within three minutes of the game but Loïck Luypaert’s drag flick was superbly snuffed out by India’s first runner Chinglensana Kangujam. Almost immediately, India had a brilliant opportunity to score when a dribbling Dilpreet Singh made a beautiful turn at the top of the circle to dodge the Belgian defender and drive in, slicing the ball across to Lalit Upadhyay who had fashioned himself in front of the post but sadly he couldn’t get a nudge on the ball. Belgium, meanwhile, mounted pressure on India with a goal through Tom Boon in the 4th minute taking 1-0 lead. With three seconds to go for the first hooter, India won a PC but Rupinder Pal Singh’s fierce hit to the right bottom of the post was saved by a Belgian defender at the baseline. India overcame a slow start in the second quarter as they gained momentum, creating potential circle penetrations. It was in the 19th minute when defender Rupinder Pal Singh intercepted a Belgian long pass to find Manpreet in the midfield who then sliced the ball into the center of the circle. Mandeep Singh was quick to react, beating goal keeper Vincent Vanasch to push the ball into the post fetching India the 1-1 equalizer. The next few minutes saw India work hard to keep the ball but a structured Belgian defence was tough to break. Meanwhile Sreejesh made an excellent save, in the 21st minute when Thomas Briels took a shot on goal, ensuring both teams went into the half-time break in a stalemate. It was advantage Belgium when they scored at the start of the third quarter when Gauthier Boccard used a powerful reverse hit from the top of the striking circle but was well-saved by Sreejesh, however Sebastien Dockier was quick to pick up the rebound, find the gap and smash the ball past the India goal keeper. Though Belgium won three back-to-back PCs towards the end of the third quarter, Manpreet Singh was unrelenting as the first runner to ensure no goal was scored. India bounced back in the final quarter, increasing their attack, finding gaps in the 15 yard mark putting pressure on the Belgian defence. But their experienced goal keeper Vincent Vanasch made some important saves to keep India in the hunt. Last five minutes saw India’s Chief Coach Sjoerd Marijne pull out their goal keeper to add an extra man to their attack. The effort worked with India winning a PC in the dying minutes of the match but Harmanpreet’s attempt was well defended and eventually ended India’s campaign. “We were much better than our previous match against Belgium. Our young players are making good progress against a world class team like Belgium which we will benefit from in the future. For now though, even a draw would have been a better result but the Belgium Goalkeeper did some good work and made crucial saves,” expressed Coach Marijne.