India, Maldives pledge for security in Indian Ocean Region: 'We are with you' says Modi 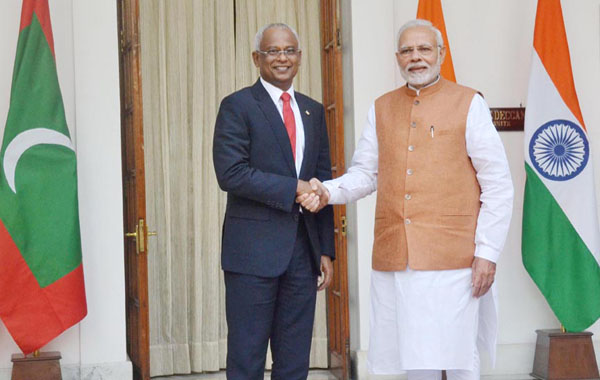 Agencies, New Delhi India and Maldives on Monday - after crucial rounds of delegation level talks led by Prime Minister Narendra Modi and the visiting President Ibrahim Mohamed Solih - agreed on the importance of maintaining peace and security in the Indian Ocean Region. "The two leaders reaffirmed their unwavering commitment and support for increased cooperation in combating terrorism in all its forms and manifestations both within the region and elsewhere, said the Joint Statement issued at the end of the talks. "Both sides agreed to enhance bilateral cooperation on issues of common concern, including piracy, terrorism, organised crime, drugs and human trafficking. It was also agreed to intensify cooperation in the areas of training and capacity building of Maldives Police Service and Maldives National Defence Force," the statement said. "In furtherance of the shared recognition that the security interests of both the countries are interlinked in the region,", the statement reiterated their assurance of being mindful of "each other’s concerns and aspirations for the stability of the region and not allowing their respective territories to be used for any activity inimical to the other". The two leaders agreed to strengthen cooperation to enhance maritime security in the Indian Ocean Region through coordinated patrolling and aerial surveillance, exchange of information and capacity building. This is President Solih's first foreign visit after assuming office in November and also comes within a month of visit of Prime Minister Modi to the Maldives. Mr Modi had visited Male during the swearing-in ceremony of new dispensation headed by Mr Solih after a keenly watched election. Prime Minister had invited Mr Solih for a state visit to India. During the talks, Prime Minister Modi informed the decision by the Government of India to provide 1000 additional slots over next 5 years for training and capacity building in diverse fields including judicial, policing and law-enforcement, audit and financial management, local governance, community development, IT, e-governance, sports, media, youth and women empowerment, leadership, innovation & entrepreneurship, art & culture. Prime Minister announced provision of financial assistance up to US$ 1.4 billion in the form of budgetary support, currency swap and concessional lines of credit to fulfill the socio-economic development programmes of the Maldives. President Solih reaffirmed his government’s "India-First Policy”, and commitment to working together closely with India. "He appreciated the generous assistance provided by the Government of India to Maldives, and identified various areas for developmental cooperation, including private sector involvement in development of housing and infrastructure, water and sewerage systems in the outlying islands, healthcare, education and tourism". Both leaders emphasized the need to improve connectivity between the two countries through the establishment of enabling infrastructure that would promote the exchange of goods and services, information, ideas, culture and people. Recognizing the importance of facilitating people-to-people exchanges and travel, the leaders welcomed the new Agreement on Visa Facilitation signed on Monday. Prime Minister Modi noted that the new Agreement will address the common concerns and ensure that people-to-people contacts are enhanced. The Maldives is one of the very few countries with which India has a visa free arrangement. President Solih expressed his happiness at the signing of the Agreement, as this will facilitate many Maldivians who send their children to school in India, to be able to accompany them. The Agreement signed by two Foreign Ministers Sushma Swaraj and Shahid Abdulla will also facilitate easier visa arrangements for Maldivian citizens and their families, to come to India for medical treatment. "Both leaders emphasised the need to ensure seamless movement of people between both countries," the statement said. In his press statement, Mr Modi recorded his appreciation that the 'people-centric development' vision of the new Maldives dispensation. "India is always with you," Prime Minister said. Giving a hint on Maldives new dispensation's clear preference to India in its diplomatic and bilateral ties, the new Foreign Minister of Maldives Abdulla Shahid visited India in November within a week of swearing in of the new regime in that country.