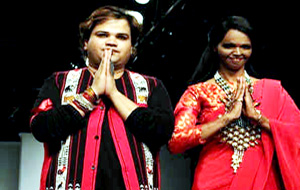 New Delhi, Various campaigns and protests are going around the country against the rape and molestation towards females and girl child. It’s time to reflect on how we as a society protect our own women and girls. Keeping the same in mind, Designer Akassh K Aggarwal showcased his collection and made his model wear red bands on their left hand to protest against female molestation and rape.Laxmi Agarwal, an Indian campaigner with 'Stop Acid Attacks' walked the ramp for Akassh Aggarwal. An alarming rate of sexual offenses against women and children was exposed through the media and social networks over the years and increasingly since 2016/17. A special reference to recent quantum rapes that took place in and around India ignited the awareness of sexual violence against women and children. Shubhashini Ornamentals presented 'Surkh- You Ignited' by jewellery designer Akassh K Aggarwal 'Surkh Collectives' is an inspiration from the world of self love. In a society that has seen women as the weaker and the second sex, here's a bow down to the ones who decided to live the way they wanted to, no matter how crazy or rebellious. His collection was vibrant that resonated with the Symbolism of Old Tribal Art of Peroi and terrecota, Banarsi meena work, wood karigari from Kashmir mixed techniques in filigree motif, stamped light weight metal sheet work, embossed 3D and metallics gold and silver with organic gemstones like coral, pearls, turquoise, lapiz, and lazzuli. Assortment of multiple accessories options, gives the collection a versatility to be worn on ethnic as well with indo-western. The time is about to be jeweled bold and beautiful. The collections gave a social message of 'Surkh-you ignited'.