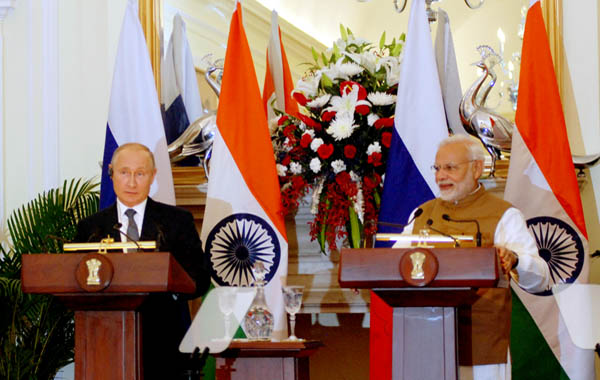 New Delhi, India and Russia on Friday pledged to make a forward movement in bilateral ties and stated that cooperation between the two countries spans across the whole gamut of sectors and rests on the fundamental pillars of political and strategic cooperation, military and security cooperation, cooperation in the spheres of economy, energy, industry, science and technology, and cultural and humanitarian cooperation. In a joint statement after the 19th edition of the Annual Bilateral Summit between the two countries, Prime Minister Narendra Modi and visiting Russian President Vladimir Putin reaffirmed their commitment to the Special and Privileged Strategic Partnership between India and Russia. They declared that this relationship is an important factor for global peace and stability and appreciated each other’s respective roles as major powers with common responsibilities for maintaining global peace and stability. Mr Putin virtually sprang a surprise when he said the ties between two countries go beyond the supplies of Russian weapons. “Our cooperation goes beyond supplies of Russian weapons....We maintain regular contacts between ministries, between the ministries of defence," Russian President said at a joint press conference with Prime Minister Modi. The visiting Russian President said both sides at the 19th India-Russia Bilateral Summit here also discussed in details about the trade cooperation. "We have goal of increasing goods turnover by 30 billion USD by 2025," he said. President Putin also invited Prime Minister Modi to be the chief guest in economic forum in September 2019 in Russia. In his remarks, Prime Minister Modi said the India-Russia friendship is "aditiya (unique and unparallel)". “We have taken our relations beyond traditional and conventional limits, this is further bolstering key pillars. Russia has always stood shoulder to shoulder with India," Mr Modi said. Prime Minister also said both countries believe in multi polarity in a rapidly changing world and also that both countries are cooperating on fight against terrorism and on issues related to Afghanistan and also on Climate Change. In their joint statement, the two leaders said that India-Russia cooperation is based on the solid foundations of the 1971 Treaty of Peace, Friendship and Cooperation between the Republic of India and the USSR, 1993 Treaty of Friendship and Cooperation between the Republic of India and the Russian Federation, 2000 Declaration on Strategic Partnership between the Republic of India and the Russian Federation and 2010 Joint Statement elevating the Partnership to a Special and Privileged Strategic Partnership. Both sides agreed that their relationship is mature and confident, covering all areas and is marked by deep trust,mutual respect and close understanding of each other’s position. They reaffirmed that being multicultural, multilingual and multireligious societies, India and Russia bring civilizational wisdom to address modern day challenges. Together, they contribute to creating a more interconnected and diverse world. They noted with satisfaction the intensification of contacts between the two countries in all spheres – more than 50 visits at ministerial level, which have injected new vigour into their relationship. Subsequent to the successful implementation of the Protocol on Foreign Office Consultations for the period 2017-18, the sides agreed to extend the period of Consultations for five more years (2019-2023) and signed a Protocol to this effect. Russia welcomed the appointment of Honorary Consuls General of India in Ekaterinburg and Astrakhan, which would further facilitate closer interaction amongst people and regions of both sides. The two sides called upon all states to work towards the lessening of global tensions and promoting the ideals of tolerance, cooperation, transparency and openness in inter-state relations. Stressing that the primary challenge in large parts of the world remains ensuring rapid and environmentally sustainable economic development, removal of poverty, reducing inequality among and within states, and providing basic health care, India and Russia pledged to cooperate with each other to achieve these goals. The two sides noted that the successful conclusion of the 70th anniversary celebrations of the establishment of diplomatic relations between India and Russia witnessed enthusiastic response among people of both countries and further consolidated people-to-people ties. ‘’The sides are satisfied with the implementation of the Cultural Exchange Programme for 2017-2019 signed in 2017,’’the statement said. They welcomed annual Russian Festivals in India and Indian Festivals in Russia and highly appreciated the ongoing youth exchange programme, exchange of writers and reciprocal support of the National Film Festivals. The sides welcomed mutual growth in tourism flows in the last two years and agreed to facilitate this positive trend. India complimented Russia for successful organization of the 2018 FIFA World Cup. They recognized the immense contribution made by the Institute of Oriental Studies of the Russian Academy of Sciences, to the promotion of India-Russia relations over several decades. Prime Minister Modi underlined that India would contribute to the success of the 200 year celebrations of the foundation of the Institute.