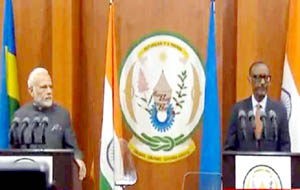 Kigali (Rawanda), India and Rwanda signed eight agreements on Monday late evening under which New Delhi will be extending $200 million lines of credit to Rwanda. Following delegation-level talks between Prime Minister Narendra Modi and Rwandan President Paul Kagame, the Indian side extended two Lines of Credit of 100 million US dollars each - one for development of industrial parks and Kigali Special Economic Zone, and the other for three agricultural projects in Rwanda. The two Line of Credit pacts were inked by Nadeem Panjetan, Chief General Manager, EXIM Bank and Dr Uzziel Ndagi Jimana, Minister of Finance and Economic Planning. Addressing a joint press conference, Mr Modi said, India will soon open a High Commission in Rwanda which will not only establish communication between the governments of the two countries but also enable facilities for consular, passport and visa. The Prime Minister said, It is a matter of honour for India as it stood with Rwanda in their economic development journey, adding that New Delhi will continue to back the African nation's development. For his part, Mr Kagame said, Mr Modi's visit represents a milestone between the long-standing friendship and co-operation between Rwanda and India. The two leaders also held one-on-one meeting. The Rwandan President is the current Chair of the African Union. Mr Modi arrived in Rwanda on Monday on the first leg of his three-nation Africa tour as part of India’s outreach to the continent. Chinese President Xi Jinping also visited Rwanda recently. “A historic visit starts with a special gesture. President @PaulKagame personally welcomed PM @narendramodi to Rwanda,” the Prime Minister’s Office tweeted. Mr Modi became the first Indian Prime Minister to visit Rwanda. Later, Prime Minister Modi interacted with the Indian community. Addressing the gathering, he said, the Indian diaspora is making a mark all over the world. "All over the world, the Indian diaspora is making a mark. They are our Rashtradoots - ambassadors," Mr Modi said. "For years the Indian community in Rwanda wanted a High Commission. This long pending demand will be fulfilled and you will be connected even further with India," he said on setting up of the High Commission office. On Tuesday, Prime Minister Modi will visit the Genocide Memorial and participate in an event on “Girinka” (one cow per family), a national social protection scheme of Rwanda initiated by President Kagame. Prime Minister will gift 200 cows to the Rwanda President.Later he will visit Uganda and on Wednesday will land at Johannesburg in South Africa to attend the 10th BRICS Summit.