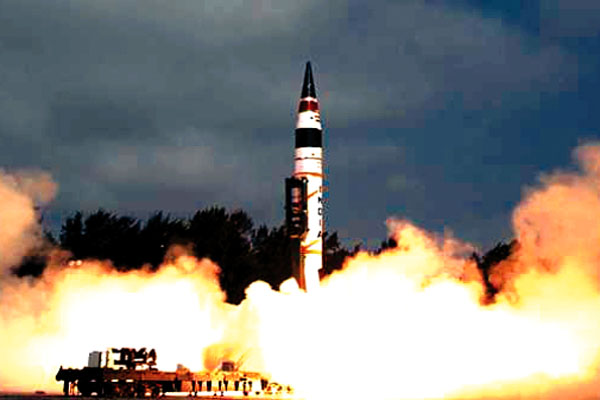 Agencies, Balasore India today successfully test fired the Long Range Surface-to- Surface Ballistic Missile, Agni-5, for its full range from Dr Abdul Kalam Island off Odisha coast. The Agni 5 missile, India’s longest range nuclear capable missile took off from the launch pad at Abdul Kalam Island at 0953 hours and started rising exactly the way it was designed for. This was the fifth test of the missile and the third consecutive one from a canister on a road mobile launcher. All the five missions have been successful, defence sources said. The flight performance of the missile was tracked and monitored by radars, range stations and tracking systems all through the mission. All objectives of the mission have been successfully met. This successful test of Agni-5 reaffirms the country’s indigenous missile capabilities and further strengthens our credible deterrence.Scientific Adviser to Raksha Mantri and Director General, Missiles and Strategic Systems Dr G Satheesh Reddy witnessed the launch. Directors of Defence Research & Development Organisation (DRDO) Labs namely ASL, DRDL, ITR, RCI and TBRL reviewed the entire launch operations. Senior officials from the Armed Forces were present on the occasion. Congratulating the Agni-5 team, Chairman DRDO Dr S Christopher said that the fifth consecutive successful flight test of Agni-5 is a major boost to country’s defence capabilities. Raksha Mantri Nirmala Sitharaman while inaugurating the Defence Industry Development Meet at Chennai, shared her happiness on the successful flight test of Agni-5. She congratulated DRDO on this successful feat and also lauded the industries who contributed to the manufacture of indigenous technologies that went into the making of the missile. Defence Research Development Organisation (DRDO) sources said the missile followed the entire trajectory like in textbook with the three stages of propulsion dropping and falling at appropriate times into Bay of Bengal. The three propulsion stages, developed completely indigenously by the DRDO, performed exactly the way they are intended to, a statement said.The indigenously developed Composite Rocket Motors have performed well and made India completely self-reliant. The missile will be so powerful that it can target most parts of Asia, including the northernmost parts of China and large parts of Europe as well.The 17-meter-long, 2 meter wide and weighing nearly 50 tonnes surface-to-surface missile Agni-V could carry a pay-load of 1 tonne, defence sources said.