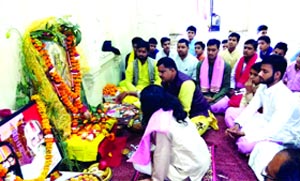 Moscow,  The Indian Air Force will buy 18 new Sukhoi Su-30MKI fighter jets, Deputy Director of Russia’s Federal Service for Military and Technical Cooperation Vladimir Drozhzhov said on Tuesday. "We have fully met our commitments on delivering all technological sets of Su-30MKI fighter jets and have received an additional bid for another 18 technological sets. The bid is being worked out," Drozhzhov told reporters. According to him, Russia is considering a range of bids for delivering military goods to New Delhi. "We have received proposals on supplying more than 20 modernized MiG-29 fighter jets and a request for modernizing some 450 T-90 tanks. We are working on these proposals to hand them over to India," TASS news agency quoted Drozhzhov as saying. The two countries also plan to sign an agreement on the production of military spare parts in India. "We have recently held the first meeting of a working group on the post-purchase maintenance [of military hardware] and agreed to step up preparations and the signing of an inter-governmental agreement on the production of spare parts in India. "A draft agreement is currently under consideration at the domestic level," Drozhzhov said. "It will be a comprehensive agreement. Earlier, we suggested signing separate agreements on every type of military equipment but India said it wanted to combine all six agreements on the production of spare parts for planes, helicopters, armored vehicles, air defence systems, naval equipment and the Vikramaditya aircraft carrier, and we accepted it," he added.