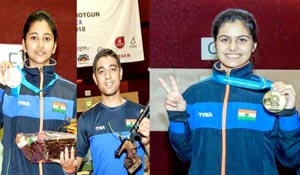 New Delhi, India created history as they topped the medals tally at the International Shooting Sport Federation (ISSF) World Cup for the first time. India finished the World Cup Rifle/Pistol/Shotgun stage at Guadalajara Mexico, with four gold medals, one silver and four bronze, a total of nine medals. However, in the last event of the World Cup, three Indians in the men's skeet competition failed to reach the podium. In the skeet competition, three shooters of India including Smit Singh was ranked 15th in qualifying with 116 points, Angad Bazar with 115 points stood at 18th, and Shireraj Shaikh at 30th spot with 112 points. Two times Olympic Champion Vincent Hancock of the USA won the gold in the event. He is also the winner in the 2015 World Championships. After a long time, Vincent, secured 123 points out of 125 in the qualification and stayed at the top and also equaled the world record with a score of 59 out of 60. He was, however, matched by Paul Adams of Australia and finally got the better of him 6-5 in a shoot-off for gold and silver. Shahzar Rizvi, Manu Bhaker, Akhil Sheoran, Om Prakash Mitharval, Anjum Moudgil and Mehuli Ghosh were the players who made India proud in the tournament. Apart from them, senior stars like Jitu Rai, Ravi Kumar and even Sanjeev Rajput shot well to just miss out and finish fourth.