India, US to seal defence deal worth $3 billion: Trump 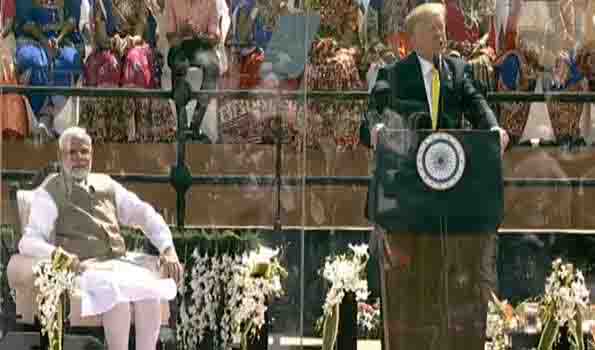 Ahmedabad/New Delhi, US President Donald Trump on Monday announced that his country will sign a defence deal worth three billion dollars on Tuesday in national capital.

Last week, India’s Cabinet Committee on Security had cleared the procurement of 24 MH-60R multi-role helicopters for the Indian Navy at a cost of 2.4 billion dollars.

Stating that the US will become India's premier defence partner, Mr Trump said, “I am pleased to announce that tomorrow our representatives will sign deals to sell over US$ 3 Billion, in the absolute finest state of the art military helicopters and other equipment to the Indian armed forces.”

The US President who is on a two-day India visit was addressing ``Namaste Trump' event at the world’s largest Motera stadium in Ahmedabad.

“As we continue to build our defence cooperation, the US looks forward to providing India with some of the best and most feared military equipment on the planet. We make the greatest weapons ever made. We make the best and we are dealing now with India,” Trump added.

Another deal close to conclusion is of six additional AH-64E Apache attack helicopters for the Indian Army. They will cost around 930 million dollars.

The Apaches from Boeing are being sourced through the direct commercial sale and the Foreign Military Sales route.