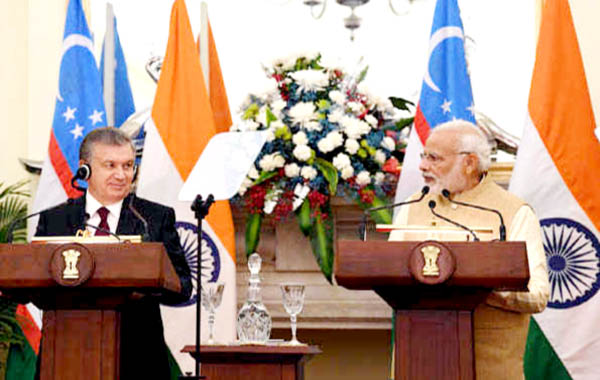 New Delhi, India and Uzbekistan on Monday inked 17 Memorandum of Understanding (MoUs) and agreements covering a range of subjects including pharmaceuticals, agriculture and cooperation in the field of military education. Both countries also agreed on cooperation between the Chamber of Commerce and Industry of the Republic of Uzbekistan and the Confederation of Indian Industry on establishment of the India-Uzbekistan business council to promote bilateral trade. Prime Minister Narendra Modi, who held delegation level talks with visiting Uzbek President Shavkat Mirziyoyev, said in a joint press statement, 'We took a long term view on the regional issues of security, peace and prosperity and cooperation.' Meaningful discussions were held between the two sides that would help deepen India-Uzbek strategic partnership, he said and termed Mr Mirziyoyev as 'a special friend'. This was Mr Modi's fourth meeting with the visiting dignitary. Uzbekistan President Shavkat Mirziyoyev, who is on a state visit to India, was on Monday accorded a ceremonial reception at Rashtrapati Bhawan here. Earlier, President Ram Nath Kovind and the Prime Minister received Mr Mirziyoyev at the forecourt of Rashtrapati Bhawan.The Uzbek President will also meet President Ram Nath Kovind and Vice President M Venkaiah Naidu, the statement added.This is Mr Mirziyoyev’s first visit to India since assuming office in 2016.