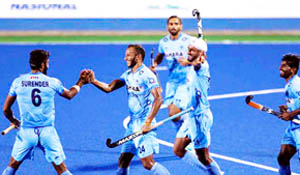 Tauranga (New Zealand), A structured defence and clinical attack saw he Indian Men’s Hockey Team beat hosts New Zealand 3-1 in the final round robin match in the double-leg Four Nations Invitational Tournament here at Blake Park on Saturday. It was India’s young brigade Harmanpreet Singh (2’), Dilpreet Singh (12’) and Mandeep Singh (47’) who scored in India’s win after the team had suffered a 0-2 loss against Belgium in their previous match. India’s mantra today was to play aggressive and that’s exactly what they did right from the start. Their first breakthrough came as early as the second minute of the match when a circle entry fetched them a PC created by Mandeep Singh. It was Harmanpreet Singh who stepped up for the drag flick and he was impeccable and fierce as he improvised the injection to flick the ball past New Zealand goal keeper Richard Joyce and earn India 1-0 lead. The early goal undoubtedly put the B0lack Sticks on the backfoot.