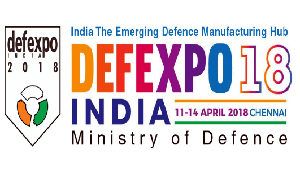 New Delhi/Chennai, In an effort to give impetus to the government’s ambitious initiative ‘Make in India’, India and Russia have signed seven Memoranda of Understandings (MoUs). The agreements were signed between the Indian Private Defence sector manufacturing companies and Russian Original Equipment Manufacturers (OEMs) for manufacture, development of spares, sub-assemblies, assemblies of identified Russian origin platforms. “Seven MoUs signed during India Russia Military Industrial Conference during @DefExpoIndia 2018 paving way for a new era of B2B defence cooperation between 2 countries,” Ajay Kumar, Secretary, Defence Production said in a tweet on Saturday. This was the third India-Russia Military Industrial Conference which was held on the side-lines of DefExpo 2018 at Thiruvidanthai, Kancheepuram district on the East Coast Road near Chennai. The Indian delegation was led by Secretary (Defence Production) Ajay Kumar while Deputy Minister of Industry and Trade of Russian Federation Oleg Ryazantcev led the Russian side. Around 75 Indian defence sector manufacturing companies and 28 Original Equipment Manufacturers (OEMs) from Russian industry participated in the conference. Deliberations during the conference were aimed to focus on needs for improvement of after-sales support of Russian origin defence platforms being exploited by Indian defence forces and also to facilitate domestic manufacturing of some of the identified spare parts through collaborations between Indian vendors and Russian OEMs.