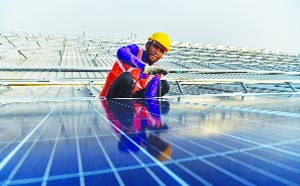 Agencies, New Delhi Indian solar sector aggregated over $10-billion in financing activity during financial year 2017, recently published market update on Indian solar industry said. Solar funding which grew last year as approximately 9.6 GW of new solar installations were added to the Indian grid, according to Mercom Capital Group’s recently released Q4 statistics. By comparison, financing activity in the sector totaled approximately $4 billion in 2016.According to Mercom Capital Group CEO Raj Prabhu, “Currently, we are forecasting investments in the solar sector to slow down along with installations in 2018. Uncertainties created by trade cases with possible safeguard and anti-dumping duty imposition will have a direct negative impact on investments unless the government acts fast to resolve these issues in a way that creates confidence among the investment community,” Project financing in 2017 rose to about $6.4 billion on the back of 9.6 GW in solar installations, compared to $3.5 billion in financing activity when 4 GW of solar was installed in 2016. Corporate funding raised by Indian solar companies in 2017 totaled $3.6 billion and accounted for 28 percent of the global total. In terms of venture capital and private equity investments, Indian companies raised over $800 million and accounted for 50 percent of the global total. The increase in corporate funding in 2017 was largely spurred by large private equity deals. The biggest of these deals was announced by ReNew Power, which closed two deals worth $200 million each. A host of other companies announced their own deals worth more than $100 million, including Greenko Energy, Hero Future Energies, and CleanMax Solar.Debt financing was another area that saw significant year-over-year growth.