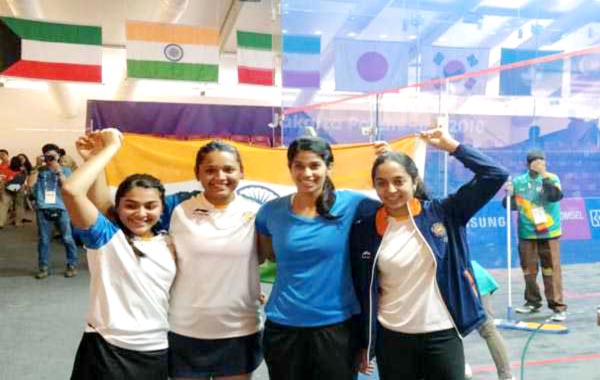 Jakarta,  India’s gold medal hope in Women’s squash team event were squashed as they surrendered meekly to superior Hong Kong 0-2, at the GBK Squash Stadium on the last day of competitions at the 18th Asian Games here on Saturday. The strategy of pitting Sunayna Kuruvilla, a promising youngster, in the opening tie felt flat as the Kerala girl found the going tough against Hong Kong’s top player Lok Tze Ho, losing 1-3 (8-11, 6-11, 12-10, 3-11) in just 31 minutes. The Indian think-tank had apparently misjudged the competence of Hong Kong players and chose Sunayna ahead of team spearhead Dipika Pallikal and paid the price for this. At the hindsight one can say if they had fielded Dipika first, the outcome could have been different.Trailing 0-2, the Sunayna tried to stage a comeback, winning the third after being neck-to-neck when the Hong Kong deuced 10-all. Yet, Sunayna claimed the next two points to stay in contention. But, the superiority of Ho was so evident that she couldn’t be denied putting Hong Kong 1-0, a winning lead. The next in line Joshna Chinappa wasn’t in her elements and never was able to produce what she did against world no 1 David Nicole the other evening in the semi-finals. It was sad to watch the experienced and team’s best bet Joshna going down without a fight in a little over 20 minutes as Annie Chi Wing wrapped it up 11-3, 11-9, 11-5 without giving any chance for the third Indian player, Dipika Pallikal. Indian women had a sensational 2-0 win against favourites Malaysia in the semi-final on Friday. They had a bronze medal at the 2010 Guangzhou Games and a silver medal at Incheon in 2014. Their men counterparts had finished with a bronze medal. Joshna offered no excuse for her defeat which ended Indian challenge “Annie Chi Wing played better and she was deserving winner.” “I am happy with team’s showing, winning against Malaysia was best thing to happen to us in this event” she said “perhaps today was not our day.” Annie Chi Wing was happy with her show “I watched Joshna beat Nicole. I knew I was against tough rival so had prepared accordingly.” "Joshna is a tough rival and one has to prepare well to face her” she added.