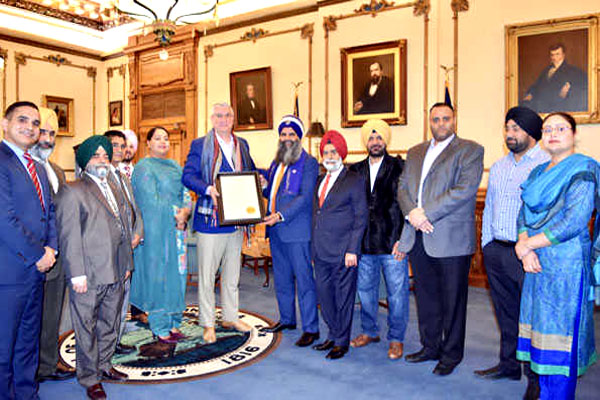 Indianapolis, Indiana Governor Eric J Holcomb celebrated the 319th anniversary of “Creation of Khalsa Day” and on this occasion he also declared the month of April as National Sikh Heritage Month by the executive order of Proclamation. Sikh community leaders were invited at the Governor’s office and welcomed by the honorable Governor for the celebrations. At the end of the ceremony, the Governor presented them the official copy of the proclamation. Sikhs:Political Action Committee chairman Gurinder Singh Khalsa, along with other community leaders presented a token of appreciation while thanking him for keeping his promise of celebrating Vaisakhi every year. “I am very thankful to the Governor along with other state and federal level elected officials who are continuously doing their sincere efforts for Sikh awareness by regularly visiting Sikh Gurdwaras; passing Sikh Resolutions etc,” said Gurinder Singh Khalsa. Khalsa further stated that we as Sikhs need to strongly condemn recent unfortunate brawl incident in Greenwood Gurdwara of Indiana which was very shameful act for all of us. Recently on April 14 , Governor Holcomb sent Vaisakhi greetings via video. During his video address Governor Holcomb said, “Hello, this is Eric Holcomb Governor of Indiana, wishing the 30 million Sikhs across the world a Happy Vaisakhi Day. Thinking about this in the larger context, the 319th Anniversary of the Creation of Khalsa and all that it means to not only to the state of Indiana but to the world. We are eternally grateful and indebted for all of your contributions and we look forward to the decades ahead.” Indiana is the only state in the US where recently both of the houses of the State legislature recognized the contributions of the Sikhs by passing Sikh Resolutions in the month of February and March. There are about 10,000 Sikhs in Indiana. Sikhs are one of the fastest growing communities with more than 3,500 businesses are owned by them.