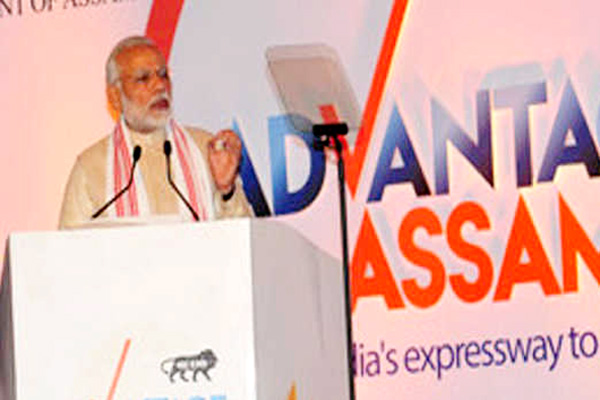 Guwahati, Terming eight North Eastern states as ' Astalaxmi ' of the country, Prime Minister Narendra Modi today iterated that the region could well turn out to be new engine of growth for new India. Speaking after inaugurating 'Advantage Assam - Global Investors Summit, 2018' here, Mr Modi said the North East could turn out to be a new growth centre of Indian economy and the country's growth story will pick up more speed when people living in this region will see fast development in a balanced manner. " We created the Act East Policy and the Northeast is at the heart of it. The Act East Policy requires increased people to people contact, trade ties and other relations with countries on India's east, particularly ASEAN countries, " the Prime Minister averred. ' The tagline of this Summit is very appropriate and gives a strong message.'Advantage Assam: India's Express way to ASEAN' is not just a statement but a comprehensive Vision," Mr Modi asserted. Giving details of various provisions of the Union Budget, 2018, and how will it impact the Northeastern region, Mr Modi said, ' Eight NE states are 'Astalaxmi' of India and could well turn out to be new engine of growth for new India. ' " We are emphasing on mantra Transformation by transportation for overall infrastructure development of the region," Mr Modi said adding, ' For infrastructure development every year Rs 5,300 crore is being spent on extending railway lines in the region. 'Mr Modi said, ' Rs 47,000 crore is being invested for laying 15 new railway tracks in the region. ' " The Centre will invest another Rs 90,000 crore in the next two to three years for construction of National Highway in the region," Mr Modi said and urged the Chief Ministers of North Eastern states to accelerate development and make Imphal to Guwahati the new nervecentre of growth of India.Mr Modi said in Guwahati a world class airport terminal will be developed which will connect the region with ten ASEAN countries. Delving on growth potential of the eight states of the region, Mr Modi said, ' Polices are now being designed according to the needs of North East. People and will have a long term positive impact on the region in near future. 'Hailing the Union Budget as one of the best one, Mr Modi said the budget provisions will benefit poor, middle class and rich of the country.