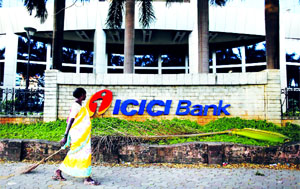 Agencies, Bengaluru Shares of ICICI Bank, India’s third-largest lender, plunged 7 percent to a five-month low on Monday after media reported its lending practices were the subject of a police investigation. ICICI Bank’s shares were down 6.3 percent at 260.75 rupees as of 0541 GMT after declining to 258.80 rupees, their lowest since late October. Police launched a preliminary inquiry about two months ago into Deepak Kochhar, the husband of ICICI CEO Chanda Kochhar, agency reported on Saturday, citing sources. The probe also involves ICICI officials and Videocon Group, a consumer electronics and oil and gas exploration company. Last week, ICICI described as “malicious and unfounded” rumors circulating online alluding to conflicts of interest in ICICI’s lending to Videocon and alleging that Kochhar favored the conglomerate. In a statement, the bank’s board said “there is no question of any quid pro quo/nepotism/conflict of interest” in its lending decisions, and expressed confidence in the CEO. India’s banking sector is on edge after state-run Punjab National Bank said in February that it had unearthed a roughly $2 billion fraud. The case has stunned financial markets and led to heightened levels of shareholder concern around any wrongdoing at Indian banks. Sentiment was also negative after the central bank fined ICICI 589 million rupees ($9.1 million) for not sticking to rules around the sale of government securities. “While this fine will not have a material impact on earnings, it is negative on sentiment because other banks seem to have interpreted the rules correctly,” said IDFC Securities in a research note to clients.