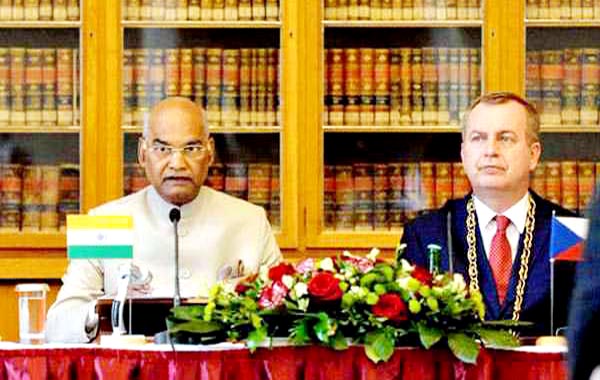 Prague, President Ram Nath Kovind on Saturday said Indology had not only brought India and the Czech Republic closer but also had an enormous role in the making of modern India and rediscovering the country’s rich past. Addressing a round table discussion of Indologists at the Charles University here, the President pointed out that Indology had an old tradition in Prague, starting with the establishment of a Chair in Sanskrit at the Charles University in 1850. 'Professor Lesny was among the founding fathers of the Czech school of Indology. He was the first European Indologist who translated Rabindranath Tagore’s poetry from Bengali into Czech, instead of using English as an intermediary,’’ he said. On Friday Czech Prime Minister Andrej Babis called on Mr Kovind and discussed closer defence and business relations and the scope for Czech manufacturing companies to partner India. Inviting Czech defence companies to invest and manufacture in India, Mr Kovind said, 'India offers a vast market and potential to scale up for Czech companies in heavy engineering, defence, advanced manufacturing, and automotive and energy technologies.' At the India-Czech Republic Business Forum meeting here, the President said that the economies of India and the Czech Republic were significantly complementary. 'From Bata to Skoda, the Indo-Czech partnership had been defined by popular embrace, sustainable practices and business confidence,' he said. Mr Kovind also visited ELI Beamlines International Laser Research Centre, the cutting-edge institution, in laser technology and research. During the President's visit, ELI Beamlines has signed an agreement with the Tata Institute of Fundamental Research in Mumbai in this sphere. Mr Kovind will leave for New Delhi on Sunday on the completion of his three-nation visit to Cyprus, Bulgaria and the Czech Republic.