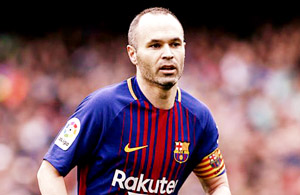 Barcelona, Barcelona captain Andres Iniesta announced in an emotional news conference on Friday he is leaving the La Liga club at the end of this season after 16 trophy-filled years pulling the strings at the heart of their midfield. The Spain international broke down in tears at Barca’s training ground with all his team mates present and a packed press room burst into applause when he finished his opening statement. “This is my last season here. This is a decision I have thought about for a very long time and have considered a lot, thinking about myself and my family,” Iniesta said. “I understand that after 22 years here I know what it means to be a player for this team, which for me is the best in the world.” Spanish media reported Iniesta will sign for Chinese club Chongqing Dangdai Lifan next season. “There are still things to sort out and everything will become clearer at the end of the season but I have always said I would never go to a team that competes with Barcelona,” he added. Iniesta has spent all of his senior career at Barcelona and is their most decorated player ever along with Lionel Messi, having lifted 31 trophies, which is soon to be 32 if Barca clinch the league title on Sunday at Deportivo La Coruna. “I don’t want to fool anyone. In a few days I will turn 34. I have squeezed myself for this club and I think the moment has come to leave,” added Iniesta, who has remained a key player this season but does not usually complete 90 minutes. “I know myself and I understand that from now on everything was going to be more of a struggle and I have given everything to this club and I wouldn’t feel happy if I felt that I couldn’t give everything, as I have been able to up to now.”