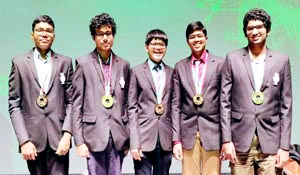 Lisbon, Five Indian students have bagged gold at the recently-concluded 49th International Physics Olympiad (IPhO) 2018 in Lisbon, Portugal. They are Bhaskar Gupta from Mumbai, Lay Jain and Pawan Goyal from Kota, Nishant Abhangi from Rajkot and Siddharth Tiwary from Kolkata. As many as 396 students from 86 countries participated in this year's IPhO held from July 21-28. From India, only five students participated and all of them bagged gold medal, the organisers said. With this, India stood first in the tally of country-wise ranking. China also shared the same top spot with bagging five gold medals in the Olympiad. This is India's best ever performance in the event. Before this, Indian team had won two golds and two silvers in the 50th International Chemistry Olympiad. In this event, only four students have participated from India. Of which, two had won gold and two silver medals. The competition consists of a theoretical and an experimental examination, each of five hours duration.