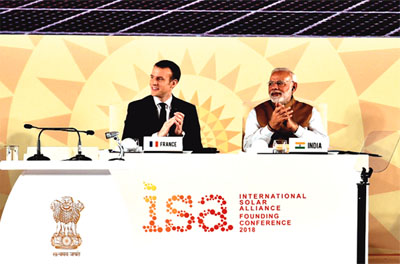 Agencies, New Delhi The founding conference of the International Solar Alliance - ISA- got under way here on Sunday in a grand manner and the international treaty-based body was formally launched by Prime Minister Narendra Modi, French President Emmanuel Macron and other global leaders. Speaking on the occasion, Mr Modi emphasised that “for combating climate change, the global community needs to look at the ancient idea of Vedas to find a way”. “Bharat mein Surya ko purey jibon ka poshak mana gaya hae (Veda’s consider the Sun as the soul of the world). Sun is actually considered as a life nurturer in India,” he said at the conference wherein various nation heads and global leaders from across the globe have lauded the role and “exemplary leadership” of PM Modi and the French President Macron. Prime Minister said while it is true that Sun has always helped all civilisations flourish in the globe, but the importance and “centre stage” position given to Sun in India is “unique”. Laying emphasis on united efforts globally to deal with the challenge, Mr Modi quoted Mahatma Gandhi and said “The difference in what we do and what we are capable of doing, will suffice and help solve world’s most problems”. In his speech, Mr Modi said a “small sapling” has come up after he had first sown the seed for such a global body in 2015. The ISA initiative is often billed as a feather in Prime Minister Modi’s cap as the move was first proposed by Mr Modi in a speech in November 2015 at Wembley Stadium in London where he referred ‘sunshine’ countries as Suryaputra (“Sons of the Sun”). ISA is a treaty-based international body for promotion of solar energy in coordination among 121 countries, which are fully or partially between the Tropics of Cancer and Capricorn.