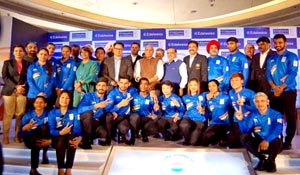 New Delhi, The Indian Olympic Association on Thursday organised a special programme in Delhi for the 222-member Indian team, going to participate in the Commonwealth Games, to be held in Australia's Gold Coast. Union Home Minister Rajnath Singh and Minister of State for Home Kiran Rijiju was also present in the programme, to motivate them for better performance in the Commonwealth Games for the Indian athletes. The Minister also met the players and officials and conveyed his best wishes. India's 222-member team will participate in the Commonwealth Games, starting on April 4 in Australia's Gold Coast, where players will try to win medals in 15 different games. This includes weightlifting, wrestling, basketball, athletics, lawn ball, boxing, table tennis and para sports. Many Indian players have already left for Australia, to adapt to foreign conditions. President of the Olympic Association Dr Narendra Dhruv Batra said on this occasion, "I am feeling very happy to send this team of my best players to Australia. We believe that these players will come out with flying colours".