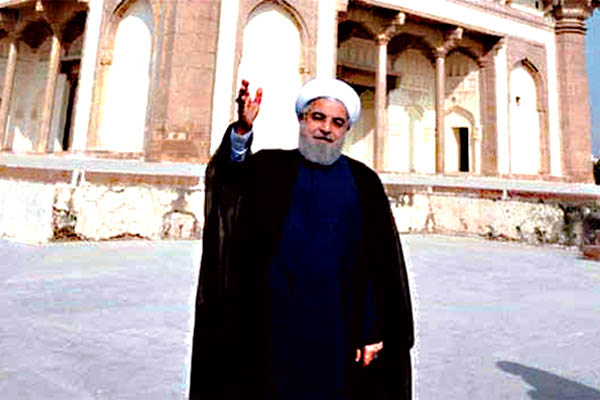 Agencies, Hyderabad In a move to further strengthen the historic Indo-Iranian ties, the visiting Iranian President Hassan Rouhani assured here on Friday that Iran was ready to share its oil, gas and energy resources with India. Addressing a large congregation of Muslims at the historic Mecca Masjid , Dr. Rouhani, said “Iran is a country which is rich in oil, gas and energy. Iran is ready to share its share its oil, gas and energy resources for the development and progress of India”. Dr.Rouhani said the Chabahar seaport would benefit Afghanistan and Central Asia. The Chabahar Port in South Eastern Iran being developed by India is seen as the closest sea link of Iran to the Indian ocean. He also offered to strengthen bilateral ties on diverse frontiers including “industry, agriculture, and new technologies”. This cooperation can mutually help India and Iran attain common goals, the President added. “Iran is desirous to continue bolstering its bilateral relationship with India”, he said. Iran and India can reap optimum benefit from this mutually cooperation, Dr Rouhani added. Touching on the visa restrictions imposed by certain countries, he said “some countries do not want to issue visas to Muslims but Iran is ready to extend complete cooperation for issuing visas to people from all communities.” “Our only aim is to promote unity among the Muslims of the world,” he emphasized adding that “the enemies of Islam do not want Muslims to be united, he said. “If Muslims (Muslim countries) were united, the President of US wouldn’t have dared to announce the holy state of Palestine as the capital of Jerusalem.”