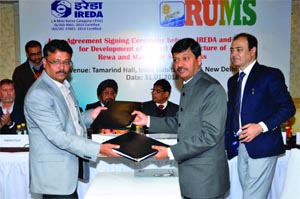 Chronicle Reporter, Bhopal IREDA and RUMSL signed the loan agreement today for World Bank financing of the infrastructure of two Solar Parks in Madhya Pradesh. The loan signing agreement underscores the commitment of Hon’ble Chief Minister Shivraj Singh Chauhantowards securing green and cheaper power to the state. Madhya Pradesh is looking forward for World Bank’s support for executing other sanctioned parks in the state as well. “Signing of the loan agreement for one of the world’s largest solar power plants is a major step towards fulfilling Hon’ble Prime Minister’s mission of 100 GW solar by the year 2022”, said Manu Srivastava, Principal Secretary of New and Renewable Energy Department, GoMP. In November 2017, the Government of India and the World Bank signed a US$98 million Loan Agreement and US$2 million Grant Agreement to help India increase its power generation capacity through cleaner, renewable energy sources. The Shared Infrastructure for Solar Parks Projectwill finance the Indian Renewable Energy Development Agency Limited (IREDA), to provide loans to select states to invest in various solar parks, mostly under the Ministry of New and Renewable Energy’s (MNRE) Solar Park Scheme. The first two solar parks to be supported under the project are in the Rewa and Mandsaur districts of Madhya Pradesh, with targeted installed capacities of 750 MW and 250 MW, respectively. In addition, other states where potential solar parks could be supported under this project are in Odisha, Chhattisgarh, and Haryana. “The Government of India is committed to set-up an enabling environment for solar technology penetration in the country.This Project will act as a lighthouse, and will help establish upcoming large-scale solar parks and support the government’s plan to install 100 gigawatts (GW) of solar power out of a total renewable-energy target of 175 GW by 2022,” said Sameer Kumar Khare, Joint Secretary, Department of Economic Affairs, Ministry of Finance. “The use of this clean and green technology will also help contribute to global efforts to meet the challenges of climate change.” RUMSLwill utilize funding,channeled through IREDA,under this project to develop the common infrastructure such as power pooling substations, intra-park transmission infrastructure and provide access to roads, water supply and drainage, among others. While some states intend to provide a full range of infrastructure services to the selected private or public-sector developers, others plan to provide only pooling stations to facilitate internal evacuation. This, in turn, is expected to facilitate solar power investment by the selected developers in support of the Government of India’s efforts to increase the share of electricity that comes from renewable energy. Rewa project is known for its unique risk mitigation mechanism and robust project structuring. The lowering of the tariff in this project was the inflection point in the history of solar energy in India. It owns the pride of being included in Prime Minister’s Book of Innovation in 2017. Further, the Project has been awarded World Bank Group’s President award for Innovation and Excellence for its transaction structure. World Bank has been a major contributor in making this project a success. The concessional loan by World Bank was one of the factors that helped in keeping lesser solar park charges in Rewa Project, which subsequently helped in achieving a first-year tariff of Rs 2.97, while the then prevailing solar tariff with VGF was Rs 4.50. “India’s goal of scaling up the provision of clean energy will require a vibrant market for solar investments,” said Junaid Ahmad, World Bank Country Director in India. “The challenge for this project is to go beyond investments; it is to deepen the solar market,” he added. “Rewa Solar Project has become a remarkable model for large scale solar projects in the world to follow, and its planning, transaction, and implementation structure was praised by French President recently “. said Simon Stolp, Lead Energy Specialist World Bank, South Asia. “The success of Rewa Project is major milestone in the progress of renewable energy sector, and it was possible only through joint efforts of IREDA, World Bank, MNRE, ISA, and IFC. Such efforts lowered the financing cost of infrastructure and helped in achieving some of the lowest tariffs in the country” said K.S. Popli, CMD IREDA. “Government of India changed its vision from MW to GW scale transition to achieve 175 GW of target, and 750 MW Rewa Solar Project is an important realization of that thinking. Such large-scale projects have made solar tariff on par with, or in some cases even cheaper than, thermal tariff. Thus, solar power in India makes not only environmental sense, but more importantly, economic sense as well. Affordable clean energy such as solar will play an important role in ensuring electricity access to everyone, including 2 billion people who still lack access to electricity.”said H.E. Upendra Tripathy, Interim Director General, International Solar Alliance (ISA).