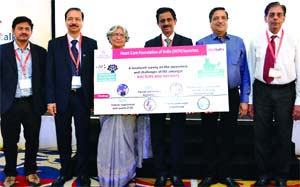 Chronicle Reporter, Bhopal A study conducted by the HCFI, a leading National Health NGO has revealed that about 5-10% of the population surveyed experiences symptoms of Irritable Bowel Syndrome (IBS) such as abdominal pain, diarrhoea, constipation or incomplete evacuation. Yet, a majority of them do not seek medical help. The study aimed at analysing IBS from the physician and patient’s point of view–awareness about the disease, its impact on day-to-day life and treatment options. It is interesting to note that even though 84.6% of the respondents felt that abdominal pain or other symptoms of IBS cannot be ignored, an overwhelming 58% of them use over-the-counter medications for relief and did not see a doctor. Given the impact of IBS on a person’s day-to-day life, it is important to raise awareness about IBS amongst both the medical fraternity and patients about IBS. Speaking about this, Dr. C C Chaubal, Senior Gastroenterologist, Hepatologist & Endoscopist, Institute of Digestive & liver Diseases, Bhopal said, “A majority of those with IBS show symptoms such as anxiety and depression, all of which can lead to frustrated eating, resulting in chronic problems. Another reason for bowel imbalance could be an irregular sleep cycle. Under extreme stress, a person’s regular body cycle gets affected. Right diet, proper care, relaxation, and psychological stability can control symptoms of IBS. Another treatment option is an antispasmodic such as peppermint oil.” The most common symptom of IBS is abdominal pain with changes in bowel habits (diarrhoea and/or constipation). Abdominal pain is typically crampy and varies in intensity. Some people notice that emotional stress and eating worsen the pain and that having a bowel movement relieves the pain. Women may notice an association between pain episodes and their menstrual cycle. Dr R K Jain, Gastroenterologist, Gandhi Medical College, Bhopal, opined, “While IBS does not have any known causes, some of them include stress, anxiety, hormonal changes during menstrual periods, and unhealthy lifestyle. Evaluate what is the trigger and make changes accordingly. It is very important to not self-medicate through over-the-counter medication. Observe the symptoms and what aggravates them by maintaining a journal. This will also help your specialist in working out a management plan for you.” The results of the survey conducted amongst the medical practitioners on the treatment methodologies for IBS revealed that almost 55.9% of the doctors use a symptom-directed, multidrug approach in the treatment of IBS; 54.5% doctors prescribe antispasmodics; and another 30.8% prescribe antibiotics, antispasmodics. About 80% of the doctors surveyed believe that an ideal antispasmodic for the treatment of IBS should offer relief from symptoms of abdominal pain/discomfort, bloating/flatulence and complete evacuation and also possess minimum side effects. Peppermint oil has emerged as a good option since almost half of the participating doctors feel that it is effective in relieving abdominal pain, gas, bloating and faecal urgency through its selective effect on the smooth muscles of the intestine. Speaking about the need to raise awareness Dr KK Aggarwal – President HCFI said, “A simple mantra that everyone must remember is that if there is no pain, it can’t be IBS. Raising awareness about the disease incidence is key. ” There is an unmet need in the treatment of IBS, as, despite the wide variety and effective treatments available, most patients do not get appropriate treatment. More widespread knowledge and proper use of available therapies (such as diet restriction and peppermint oil) will enable both the physicians as well as patients in achieving a better quality of life and relief from symptoms.

Some interesting insights from the patient survey include the following;