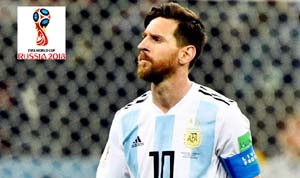 By Yashovardhan Maheshwari Central Chronicle Bhopal: On 21st June , In the Nizhny Novgorod Stadium the mighty Argentina faced the inform but still far inferior Croatia. Nobody had expected the scoreline to be in favour of Croatia but the underdog team played to their full potential outclassing the might of the South- American giants . Argentina’s performance was summed up by the distraught , teary-eyed , stunned and disappointed faces of the fans who kept on cheering for their team till the end.  It was an afraid and nervous team which came out to play against Croatia on Thursday. Their body language didn’t show confidence rather it was subdued due to the weight of the expectations and also seemed to carry the burden of the Iceland match into this one , which definitely didn’t help there cause . The captain and arguable the best player in the world , Lionel Messi seemed a bit anxious during the toss and seemed extremely off- colour in the match. Argentina coach seemed the most anxious of all on the field as he could not sit at all and kept brisk walking from one corner to another of the technical area. After the Iceland match the head coach , Jorge Sampaoli adopted an attacking strategy with a back 3 , which failed miserably and let to a humiliating Argentina defeat in an all important group stage match almost shattering the world cup dream. The manager is most to blame as he seemed to have no particular plan or strategy and his new strategy undermined the skills of the argentine attack and made the defence vulnerable . It led to Argentina conceding 3 goals and losing by the highest margin of goals in 50 years of the team’s history .  In the first half of the game, both teams were balanced and both adopted an attacking style of play and it was pretty even with both Argentina and Croatia missing close opportunities to take the lead .At halftime it was 0-0 and it was uncertain who would win . But the Croatia targeted the weak Argentina  defence and forced the defence to play the ball to the goalkeeper. In the 53rd minute , the Argentine goalkeeper , Willy Caballero tried to chip the ball over Ante Rebic’s head to a defender but the ball landed straight at the feet of Rebic who didn’t disappoint and with a flawless strike sealed Croatia’s lead . From there was no coming back for Argentina who fell apart miserably leaving the legend Diego MaraDona in tears . Goals from Luka Modri? and Ivan Rakiti? further humiliated the South American giants and bought Messi’s dream on the brink of shattering. Argentina still have a chance of revival in the world cup even after two terrible performances . This opportunity comes against Nigeria which a must win match for Argentina to qualify for the knockout stages of the the tournament.The football team need a bit of favour from Croatia to hold the Iceland team to a draw which would most definitely seal Argentina’s spot in the round of 16. The team is in a disarray at the moment with the argentine players not happy with the head coach and his tactics and a argument between Willy Caballero and Pavon leading to a negative environment in the dressing room . Things need to be changed before the all important Nigeria clash . Head coach, Jorge Sampaoli needs to device strategies which play to the strengths of an impeccable Argentine attack and the players need to push there game up or Argentina might have to see the door at Russia 2018.  It is rumoured that Messi and the senior players would be picking the squad for the game and the goalkeeper Willy Caballero and Senior striker , Aguero would be dropped . Argentina would have a 4-4-2 or 4-3-3 formation which would play to the Barcelona star, Leo Messi’ strengths. There is hope that the humiliation will ignite a fighting spirit and Argentina will play as a cohesive unit.Messi who has been a mere shadow of himself at Russia 2018 needs to shine now , Di Maria needs to be the efficient space maker as he was in 2014 and Mascherano needs to be a wall at the defence guiding the uncapped goalkeeper Franco Armani . Its now or never for Argentina.