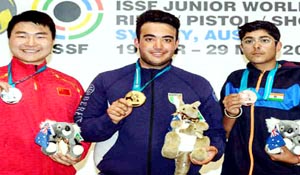 Vivan Kapoor (Right) of India with Bronze on Friday in Sydney New Delhi, India's 16-year-old Vivan Kapoor won his first World cup medal in the ISSF Junior Shooting World Cup here as Bronze on Friday. The young shooter hits 30 shots in the final of six players. Vivaan was part of the Indian trio that won a team bronze, alongside Lakshay Sheoran and Ali Aman Elahi. He then shot 26 out of the first 35 birds to edge out Chinese Taipei’s Kun-Pi Yang, who also had the same number of hits. Vivaan qualified in a higher position for the final, which ensured his first Junior World Cup medal.