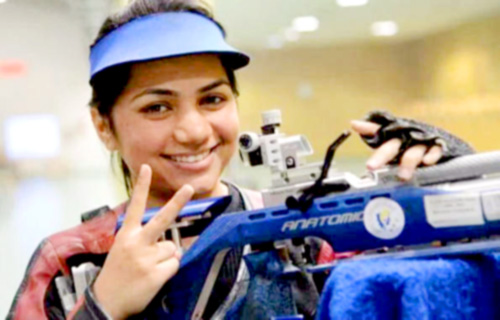 New Delhi, Apurvi Chandela on Wednesday secured the world number one spot in 10 metre air rifle category of women in International Shooting Sport Federation (ISSF) world rankings. With 1926 ranking points, she reached the top spot in 10 metre air rifle.Expressing her happiness, Chandela tweeted about the moment saying she “touched a milestone in my shooting career.” Chandela had also won the gold medal with a world record score in the 10m air rifle event at the season-opening shooting World up in New Delhi earlier this year. On the other hand, Anjum Moudgil has also occupied the number 2 spot in the same event to make it a one-two for India. She had too won a silver at the World Championship last year. Both Chandela and Moudgil had booked a quota place for the Tokyo 2020 Olympics for India at the championship in Changwon last September. In the men's category, Divyansh Singh Panwar rose to No 1 in the world. The 16-year-old had won the silver medal in men’s 10m air rifle event along with a mixed team gold with Moudgil. In the pistol events, Manu Bhaker is the world No 10 in 25m pistol category in the women’s section while in the men's section Anish Bhanwala has occupied the number 10 spot in the men’s 25m rapid fire pistol. In 10m air pistol, Abhishek Verma, who also won a gold medal in Beijing, is world No 3 while New Delhi World Cup gold medallist Saurabh Chaudhary clinched No 6 spot.