It is my dream that every individual gets pure water at home: Kamal Nath 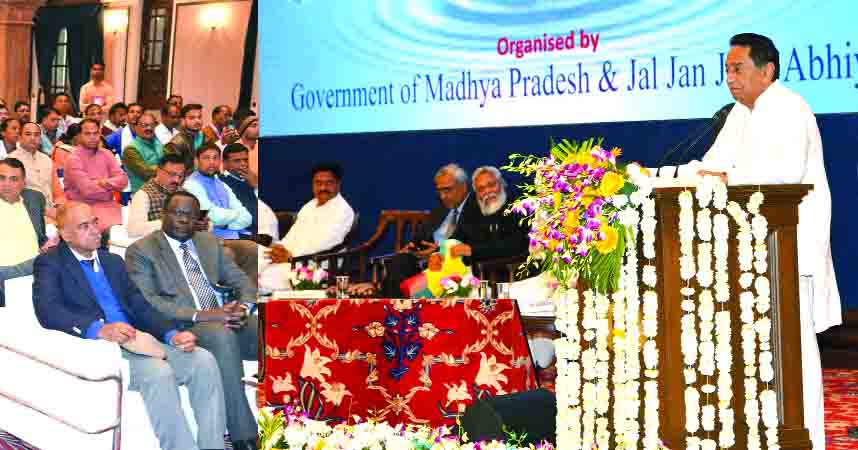 Bhopal,
The Chief Minister Kamal Nath said that in the coming time, availability of water is the biggest challenge before the society and government.  All of us together will be able to face this challenge. He further said that it is his dream that every individual should get pure water at home itself.  It is certain to achieve, if everyone also cherish so. Kamal Nath was addressing the National Water Convention in respect of Right to Water Act, organized under the joint aegis of Madhya Pradesh Government and Jal-Jan Jodo Andolan at Minto hall. Water and Environment Experts and Social Activists from 25 states are participating in the convention. Discussions on the proposed ‘Right to Water’ subject will take place during the convention.

The Chief Minister said that water crisis is increasing due to our negligence and lack of understanding, which will become more serious in future.
He stated that at the international platform during the Earth Summit in 1982, he had raised the issue that the environment and forests are safe as long as we have water. Hence, we will have to work first to save water and to conserve and protect water bodies.

Kamal Nath said that today our 65 dams and 165 reservoirs are drying up. Local bodies are able to provide water to citizens in 2 to 4 days. This crisis will further deepen in future. We have to be concerned about it from today. He said that our environmentalists and volunteers, working in the field of water conservation with dedication will have to play an important role in this. He said that if we do not take care about it from today, the future generation will not forgive us. Kamal Nath mentioned that our aim in bringing the Right to Water Act, is to create awareness among the people to save water and to act as a companion with the Government in water conservation.

He said that he expects from the people working in the field of water conservation to give their important suggestions to make this law practical and effective. They should also suggest measures how to ensure water for people in future. Kamal Nath said that many new technologies for water conservation and increasing ground water level are available today. We should also learn these modern techniques and use them to save water and expanding this to the common people.

The Minister for Public Health Engineering, Sukhdev Panse said that under the leadership of Chief Minister Kamal Nath, this government is going to give legal rights to the people for adequate water, water in access and drinking water. Madhya Pradesh will be the first state in the country to give such a right.  Panse said that every aspect from saving every drop of rain and supplying it to the house will be included in the Water Rights Act. Water recycling, water recharging, distribution and use will also come under the purview of this law. He said that at present, 72% of the population of the state lives in 0.1 lakh 28 thousand habitations in 55000 villages.

Ninety eight percentage of the drinking water system of villages is based on ground water. That is why the declining ground water level is increasing the water crisis every year. He said that in the coming five years as per the intention of the Chief Minister, we will provide 55 litres per person pure and clean water through taps in every household in the state.  Panse said that he is sure that the detailed discussions on the right to water today would definitely lead to better conclusions.

Jal Purush Magsaysay award winner Prof. Rajendra Singh congratulated the Chief Minister Kamal Nath for taking the initiative for enactment of right to water law and forcing the entire country to think that they should work for water conservation and its better use.  All the State Governments should follow this initiative of Madhya Pradesh. He said that by taking the initiative to enact a water rights act, the Chief Minister has awakened the sense of ownership within the society by creating confidence in them that water resources are ours and for us.

This is time when we all should use water with discipline. The Chief Secretary, S.R. Mohanty, Additional Chief Secretary, Panchayat and Rural Development Manoj Shrivastava, Principal Secretary, Public Health Engineering Sanjay Shukla and water and environment experts from all over the country were present.