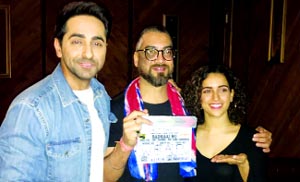 Junglee Picture’s Badhaai ho starring Ayushmann Khurrana and Sanya Malhotra wrapped their shooting schedule last evening. After 2017’s sleeper hit ‘Bareilly Ki Barfi’, Junglee pictures is now set to deliver yet another outing with Ayushmann Khurrana. The entire team celebrate the film’s wrap by indulging in a small celebration along with the makers.The celebration also saw lead actors Ayushmann and Sanya having a gala time by dancing their heart out. Ayushamann Khurrana too to Twitter sharing, “ Wrap up! #BadhaaiHo”. The official Twitter handle of Junglee Pictures also shared some inside videos of wrap up party. Badhaai Ho is a coming-of-age story of a family as it grapples with some unexpected news. The film will be directed by Amit Sharma, who has helmed over a 1000 ad films, including the one on Google Reunion and a short film for Kashmir Tourism, and made his feature film debut in 2015. Badhaai Ho brings to the audience the fresh pairing of Ayushmann Khurrana and Sanya Malhotra. Produced by Junglee Pictures and Chrome Pictures’, Badhaai Ho is directed by Amit Sharma.