Its impossible to monitor each and every bank branch to check scam a la Nirav Modi: RBI 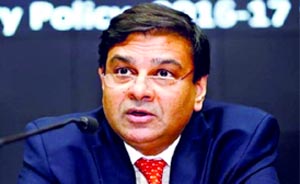 Agencies, New Delhi, Reserve Bank of India Governor Urjit Patel has said the Central bank does not have adequate power to check a fraud like the Nirav Modi episode. It is, Mr Patel said, impossible for the RBI to monitor each and every bank branch. According to sources, Mr Patel, in a written reply to the Standing Committee meet, said that there are more than 1.63 lakh bank branches in the country which make it impossible to check the day to day affairs over there. On Tuesday, Mr Patel assured a Parliamentary panel that adequate steps were being taken to strengthen the banking system and hoped that an episode like ‘Nirav Modi fraud’ will not be repeated in future. The sources said, ‘’Urjit Patel told the panel that steps were being taken to strengthen the banking system. We are confident that we will be able to tide over the crisis.’’ In a reply related to Non-Performing Assets, Mr Patel informed the standing committee that after implementation of the Insolvency and Bankruptcy Code, the situation on the NPA front has improved. There have been rising concerns about bad loans, health of various public sector banks and fallout of the the nearly Rs 13,000 crore fraud at Punjab National. Mr Patel, who appeared before the Standing Committee on Finance, was questioned by the Chairman and Congress leader M Veerappa Moily on various issues, concerning NPAs of banks and also on the high-profile fraud cases. According to sources, other members of the panel and Mr Moily grilled Mr Patel on issues, including amount of cash returned post demonetisation. Sources said at the last meeting of the Standing Committee when Mr Patel appeared, he had told the panel that the RBI has ordered for new counting machines as the existing ones or the manpower were not sufficient to complete counting of huge currency. New machines were being procured and these can count huge amount of notes in split seconds and also eject fake notes. The parliamentary panel has members from various political parties, including former Prime Minister Manmohan Singh. Other members include Nishikant Dubey Rattan Lal Kataria (both Bharatiya Janata Party), B Mahtab (Biju Janata Dal), Prem Das Rai (Sikkim Democratic Front), Saugata Roy and Dinesh Trivedi (both Trinamool) and Jyotiraditya Scindia (Indian National Congress). Media reports have asserted that fugitive diamond trader Nirav Modi had fled to United Kingdom and is seeking political asylum.Nirav Modi is wanted in the Rs 13,000 crore Punjab National fraud case.