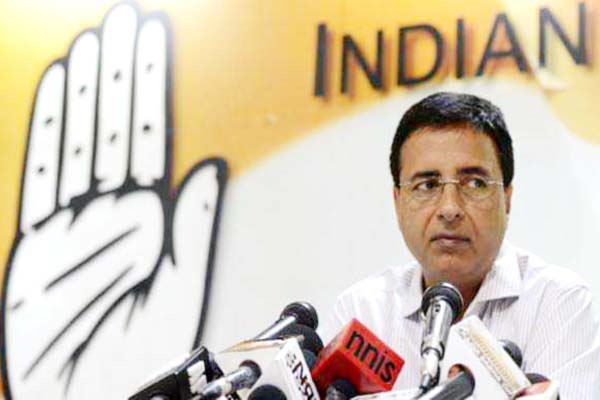 New Delhi, Ahead of the one-day fast of Prime Minister Narendra Modi and other BJP MPs to protest the disruption of Parliament by the Opposition, the Congress on Wednesday said it was not the time for 'upwas' (fast) but for 'sanyas' (retirement) for the failure of the Government to fiulfil promises made to people during the 2014 Lok Sabha elecitons and to bring the promised 'acche din'. Talking to reporters here, AICC media incharge Randeep Surjewala said, 'sensing a near defeat in the next general elections, the PM and other BJP leaders are getting ready for a 'farce' of a fast over the disruption of Parliament by the Opposition. If the Governmwnt itself will go on a fast then who will govern the country? If you are really so weak and helpless then you should quit power and go on a 'sanyas'.' Calling on the PM to indulge in remorse for the failure of his government to fulfil promises made to people during the Lok Sabha elections and its failure to respond in Parliament on the various burning issues facing the country like the bank scams, the alleged irregularities in the deal for Rafale fighter jets, the CBSE paper leak, the dilution in the SC/St Act, the non fulfilment of the promise of special status for Andhra Pradesh, providing remunerative prices to farmers for their produce and jobs to the crores of youth in the country, Mr Surjewala said, 'whether in Opposition or in Government, the BJP did not allow the temple of democracy to run. They did not allow a debate on the no-confidence motion, nor on the various bank scams, the deal for Rafale fighter jets. They put a question mark on future of students by failure to stop the CBSE paper leak. Despite their huge majority in the Lok Sabha, the Lok Sabha ran for just 1 per cent of the time and the Rajya Sabha for 6 per cent. Now they are themselves indulging in the 'farce' of a fast.' Reminding the PM that the country was watching him, Mr Surjewala said, 'your words have no value. You do not have a sense of responsibility which is why you are sitting on a 'upwaas'. You need to wake up at least now otherwise 2019 will mark your 'sanyas' (retirement).' PM and BJP chief Amit Shah along with BJP MPs will observe a fast on Thursday to protest the disruption of Parliament by the Congress.