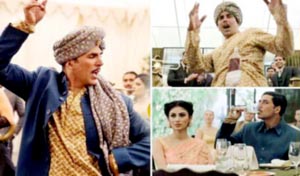 New Delhi, After treating the audience with a romantic song 'Naino Ne Baandhi', the makers of 'Gold' have treated the audience with a celebratory song 'Chad Gayi Hai' featuring Akshay Kumar and Mouni Roy. Set against the backdrop of a party, 'Chad Gayi Hai' showcases Akshay letting himself loose on the trippy beats as he grooves to the song. While Akshay Kumar aka Tapan Das is seen enjoying himself, his on-screen wife Mouni Roy has a hard time controlling his antics. Composed by Sachin-Jigar, 'Chad Gayi Hai' is crooned by Vishal Dadlani and Sachin-Jigar and is penned by Vayu. Starring Akshay Kumar, Mouni Roy, Kunal Kapoor, Amit Sadh, Vineet Singh and Sunny Kaushal, Gold promises power packed performances by an ensemble cast. 'Gold' is produced by Ritesh Sidhwani and Farhan Akhtar, helmed by Reema Kagti and is all set to release on August 15.