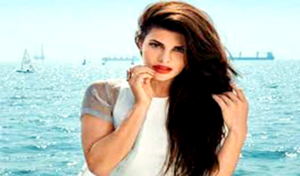 New Delhi, Jacqueline Fernandez is all set for a peppy number and her second collaboration with choreographer-turned-director Remo D’souza for his movie 'Nawabzaade', trade sources said on Saturday. 'For the same film, Varun Dhawan and Shraddha Kapoor had last year shot a new version of Guru Randhawa’s hit track, 'High Rated Gabru'. Jacqueline was recently approached for the starry dance number and she agreed to do it,' sources said. The song will be shot in a club set up by March end and will be choreographed by Remo. 'Nawabzaade' stars 'Dance India Dance' alums Punit Pathak, Raghav Juyal and Dharmesh Yelande who essayed the roles of small-town boys with big dreams. The film is shot in Varanasi and Mumbai and it has been wrapped up. Directed by Jayesh Pradhan, 'Nawabzaade' is produced by Remo D’souza, Bhushan Kumar and Mayur Barot. Recently, Jacqueline has also shot a special dance number which is a recreation of Madhuri Dixit’s 'Ek Do Teen' for 'Baaghi 2'. The actress is busy shooting for 'Race 3'. Jacqueline will also star in Tarun Mansukhani’s action adventure film 'Drive' opposite Sushant Singh Rajput.