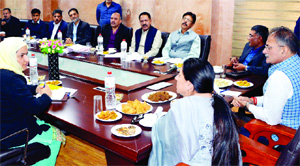 Agencies, Srinagar, J&K Small Scale Industries Development Corporation Ltd (SICOP) that manages 52 industrial estates in the state, achieved a turnover of Rs 779.21 crores during the financial year 2017-18, an official spokesman said here on Tuesday evening. He said that this information was disclosed at a meeting of the Industries & Commerce (I&C) Department chaired by Deputy Chief Minister Kavinder Gupta on Tuesday at SanatGhar, Bemina. In the meeting it was informed that SICOP achieved a turnover of Rs 779.21 crores during the financial year 2017-18 against the target of Rs 647.50 crore. The officials said that around 8,000 artisans are trained by the Handicraft department annually in various crafts. It was revealed in the meeting that the department till date has 332 corporative societies with 36,531 membership. Besides, 45,492 artisans were provided with a loan facility of around Rs 400 crore for their economic empowerment. The department has also done an export business of handicrafts of Rs 115.12 crore for the financial year of 2017-18. The Deputy CM was informed that J&K Cements has achieved a phenomenal increase in its production in comparison to last five years. It was revealed that the corporations for 2017-18 went on to produce 850 metric tons of cement although the average production for the cement for the year was 800 metric ton, thereby achieving Rs 114.01crore turnover. Giving details about Handlooms department, the meeting was informed that presently 12 clusters under union government are working in the State. Each cluster with around 200 registered weavers is provided with training on weaving, dying, and designing of various forms of fabrics. The Deputy Chief Minister, who also holds the portfolios of Industries & Commerce and Transport Departments, took a detailed review of the functioning of the I&C department, including status of spending and the revenue generated by its allied departments and Corporations. The meeting was informed about various interventions introduced in the department to bring in fiscal discipline in its allied departments to make them profit-generating units. He was also apprised about the infrastructure development carried out by different government departments and agencies. Speaking on the occasion, Mr Gupta said that all the developmental schemes should be implemented in a time-bound manner as it would greatly help in percolating the benefits of these schemes to its intended target. Urging for timely disposal of cases, he said that a conducive work environment needs to be created so that people will receive their due in a time-bound manner. He impressed upon the officers to maintain high standards in delivering their professional duties, saying it will send a positive message among masses. During the meeting, Mr Gupta said that human resource is the pivotal part for the smooth functioning of any organization and ensuring the welfare and timely promotion of employees translates in getting better results from them.