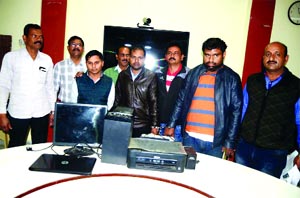 From today-July 9- the Chief Minister Mr Kamalnath lanched ‘Jan Adhikar’ programme to address the problems of the common person and provide than assured and satisfactory solutions. This weekly programme will be held on every Tuesday. The Chief Minister will hold dialogue with the collectors through video conferencing an selected complaints and grievances. The final disposal will be done by the Chief Minister Secretariat. Whenever there is change of Government are in the change of Government even within a party Chief Minister launches some new programme of redressed of public problems. Every new Chief Minister blames the outgoing government handover of ‘empty treasury’ and defects in their programmes. Mr Kamal Nath on review such scheme of the previous BJP Chief Minister Mr Shivraj Singh Chauhan’s programmes of ‘samadhan on line’ – CM helpline, Public Service Guarantee Act unsatisfactory in providing result and launched his updated ‘Jan-Adhikari’ programme so that the problem and grievances of the people could be instantly resolved. Mr Kamal Nath consider it as a right of public to have their problem attended promptly by the government. The ‘Jan Sunwai’ programme of Shivraj Government is definitely a big success and people are getting their problems solved quickly. It is also held every Tuesday by the Collectors, Commissioners, Superintendent of Police and upto Director General of Police levels. Earlier of Chief Minister Mr Babulal Gaur launched “Gokul Gram” and Chief Minister Uma Bharati launched “Janata Darbar” and “Jal-Jangat-Jameen” programme. The Congress Chief Minister Mr Digvijay Singh launched “Zila Sarkar” for ground level administration.” Village Secretariate and the government at the door. All there programme were abandoned after they went out of office. Even at Central Pandit Nehru launched “Five-year Plan” Mrs Indira Gandhi launched “20-point programme”, Mr Morarji Desai launched Annual Rolling Plan, and the Modi Government scrapped “Planning Commission and constituted “Niti” Commission. Every new party government make changes in the name of the programme. At centre when Dr Radhakrishnan became President he started “Monthly Janata Darbar and after few months it was closed down. In Maharashtra Shiv Sena when come in power it launched cheap food for all as “Pav Bhaji” and “Bhakhar” but after some time it were closed down. In Madhya Pradesh Shivraj Government launched same type of cheap food programme named “Deen Dayal Rasoi” at Bhopal and promised to spread out in whole state. Now with the change of government the “Rasoi” is closed and it is hinted out it will be replaced with “Indira Thali”. In a democracy there will be always change in the party government but government itself is always there permanently. These programme should be so framed that continue even after the change in party governments.