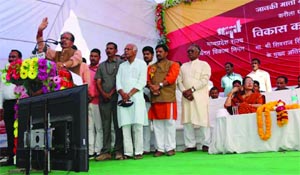 Chronicle Reporter, Bhopal Chief Minister Shivraj Singh Chouhan said that Janki Mata Mandir situated in Karila village will become fifth dham. Karila dham will be known for its grandeur at the international level. Chouhan laid foundation of development works costing Rs. 6 crore 29 lakh at the annual fair organized in Karila on the occasion of Rangpanchmi. Chouhan mentioned that keeping in view the convenience of devotees and to make the Karila Dham complex a prime center of religious tourism, priority will be given to the development and upgradation works of temple. All the works will be undertaken by the Madhya Pradesh Tourism Development Corporation. He mentioned that the construction of beautiful grand entrance at Karila Dham complex, parking area for 2 and 4 wheelers, shed on parikrama path, large waiting hall for devotees, police watch tower, over head tank, modern and clean toilets and construction of grand Shabri Mata Mandir will be carried out. During the programme, Chouhan made announcement to construct Belai-Karila Mata road costing Rs. 17 lakh, construction of Bangla Chouraha to Karila Dham approach road at a cost of Rs. 2 crore 40 lakh and construction of all the roads from VIP road to Karila approach road costing Rs. 5 crore 20 lakh. CM Chouhan along with his wife and devotees reached Mata Janki and Luv-Kush Mandir on foot and performed pooja. He prayed for the happiness and prosperity of the state and its people. Minister for Public Works Rampal Singh, President Jila Panchayat Smt. Baisahab Yadav, MLA Ashok Nagar Gopilal Jatav, Public Representatives and devotees in large number were present on the occasion.