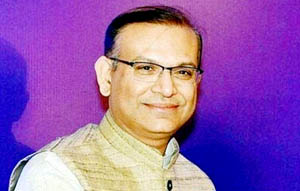 New Delhi, Sparking a major row, Union Minister and BJP leader Jayant Sinha on Saturday defended his decision to 'felicitate' and extend 'good wishes' to the accused in the Ramgarh lynching case and termed the fast-track court verdict sentencing each accused to life imprisonment as wrong. "I have repeatedly expressed my misgivings about the Fast-Track Court judgement sentencing each accused to life imprisonment. I am pleased that the Hon'ble High Court will hear the matter as a statutory court of appeal to test the correctness of the Fast-Track Court order," Mr Sinha said in a series of tweets. He pointed out that "the Hon'ble Ranchi High Court, which is the first court of appeal, has suspended the sentence of the accused and released them on bail while admitting their case. The case will once again be re-heard". "I unequivocally condemn all acts of violence and reject any type of vigilantism. The rule of law is supreme in our constitutional democracy. Any unlawful acts, particularly those that violate the rights of any citizen, should be punished with the full force of the law," he wrote in another tweet. Mr Sinha, son of former Union Minister and senior politician Yashwant Sinha, told reporters that "I have already made it clear that the guilty in the murder of Alimuddin Ansari should be brought to justice. What happened is really wrong. I condemn the incident. Rule of law in democracy should prevail". He said the accused when released on bail "came to my house, and I extended good wishes" - referring to the photographs showing him honouring some of the accused."The process of law should continue in future also....the guilty ones should be punished and those not should be released," he said. The accused have been convicted by a lower court of lynching a man named Alimuddin Ansari, 40, on June 29, 2017.BSP leader Sudhindra Bhadoria has said that Mr Sinha's behaviour is unbecoming of a Minister as he is "encouraging" those who are involved in lynching and "this is one of the most shameful things happening in post-independent India". RJD too has slammed the Union Minister's conduct.