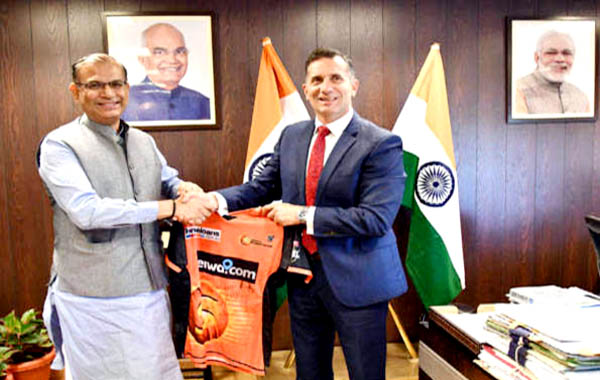 New Delhi, In order to establish direct non-stop flights between India and Perth, Minister of State for Civil Aviation Jayant Sinha on Wednesday met with Western Australian Tourism Minister Paul Papalia to receive further commitments from the Western Australian State Government. Mr Sinha said India and Australia share strong trade, investment, sporting and education ties. Direct connectivity between India and Australia has the potential to deepen these relationships. “India has a very open air service agreement with Australia. It encourages both Indian and Australian airlines to consider making use of the liberal arrangements to mount more flights between the two countries,” he said. He added that many Indian carries have now been permitted to fly on international routes and the government hoped to see many new direct flights and increased frequency between the two countries. Mr Papalia said: “The Western Australian Government is serious about growing the number of visitors travelling to Western Australia from India, which is why we have committed marketing funds for the first time and appointed a market representative to work with travel trade and Tourism Australia to promote the State.” He added that the State has much to offer Indian travellers, whether they’re visiting for business, education or leisure. Perth boasts the best hotels in Australia, with more than 3,000 new rooms opening in the past few years. It is also the perfect launching pad to visit our spectacular regions. The Ministers said the discussions were positive, agreeing there would be benefits for both India and Western Australia if a direct service was established. Air India Chairman and Managing Director Pradeep Kharola was also present in the meeting.India is already a fast growing market for Western Australia with the number of visitors increasing by 38 per cent from the year ending December 2015 to the same period in 2017. The Western Australia Government has recently committed funds to market the State to Indian consumers for the first time and has appointed a dedicated marketing representative based in Mumbai.Air India has agreed to explore the business case for the route.