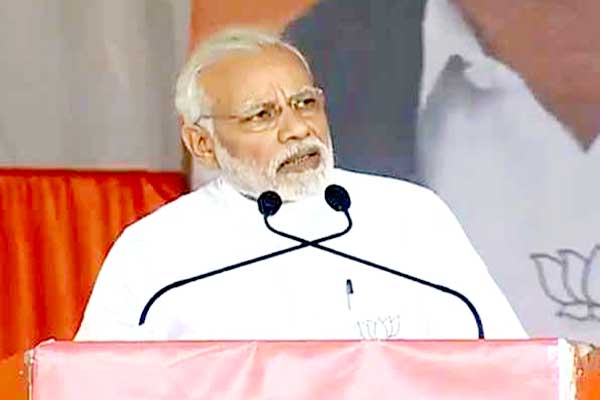 Tumakuru, Karnataka, Prime Minister Narendra Modi, continuing his onslaught on the Congress, on Saturday accused the party (Congress) of having a secret understanding with the Janata Dal (Secular) during the May 12 Assembly elections in Karnataka. Addressing a rally here on the third day of his campaigning, Mr Modi said the two parties have united to allow Congress win the Mayorship in the Brahut Bengaluru Mahanagara Palike (BBMP) though BJP had won largest number of seats and forged an alliance, but elsewhere in the State they were indulging in shadow boxing as if they were fighting each other. He claimed that the JD(S) is supporting the Congress. He said it is abundantly clear from the outcome of various poll surveys that the Janata Dal (Secular) will be a distant third in the Elections. Mr Modi said former Prime Minister H D Devegowda during the 2014 Lok Sabha elections had stated that he would commit suicide if Mr Modi came to power. 'But I told him during the campaign meetings that he should not resort to such acts and that he held him in high esteem'. He said that the Congress which had been ruling the country for most part of the period after Independence had been hoodwinking the people in the name of uplifting the poor and in the current elections the Party has now turned its attention on farmers. What had these governments in the past done to enable farmers improve their lot and get better price for their produce. On the contrary the country is witnessing large scale farmer suicides. The Congress also failed to provide water for irrigation purposes. All that they had achieved was to fill in the coffers of the Ministers. Questioning what happened to the Upper Bhadra project that aimed to bring water to the Tumakuru district, he wondered and accused the Congress government of failing to draw projects to lift water from the Hemavathi river to irrigate Tumakuru lands. The parched Tumkuru town was also deprived drinking water due to the non implementation of the Yetinahole drinking water project, he added. He said during the last four years the BJP government at the Centre had invested Rs.100,000 crore on irrigation projects across the country and this included five major projects in Karnataka. The BJP is also focusing on realising the dream of former Prime Minister A B Vajpayee in linking rivers in the country. In Karnataka efforts would be taken to link rivers Netravathi and Hemavathi. This would benefit Tumakuru and eight other adjoining Districts, he added. He said to benefit the coconut growers in the region the government is taking a series of programmes, and due to its efforts export of coconut had increased by 60 per cent. At the outset, Mr Modi remembered the glorious part played by the religious mutts in the State, including the famous Siddaganga Mutt in Tumakuru in the fields of education and improving the lot of the people through various societal upliftment programmes. Mr Modi would be addressing meetings in Gadag, Shivamogga and Mangaluru today. In all he would be addressing 21 meetings across the state till May 9.