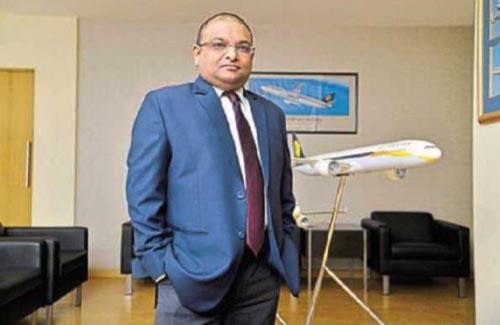 New Delhi, Saddled airline Jet Airways Chief Executive Officer (CEO) Vinay Dube and deputy CEO and Chief Financial Officer Amit Agarwal resigned from their posts on Tuesday, citing “personal reasons”. Mr Dube resigned with immediate effect, the airline said in a stock exchange filing in Mumbai. “Pursuant to Regulation 30 of SEBI (Listing Obligations and Disclosure Requirements) Regulations, 2015, we wish to inform you that Mr. Vinay Dube, Chief Executive Officer of the Company, vide his letter dated 14 May 2019, has resigned from the services of the Company with immediate effect due to personal reasons,” the filing said. Mr Dube had joined the carrier in August, 2017. Earlier in the day, Mr Agarwal also tendered his resignation due to personal reasons. His resignation has come into effect from May 13. The cash-strapped airline Jet Airways has been facing a mounting debt of more than Rs 8,200 crore. On April 17, it has suspended all its flight operations 'temporarily' due to lack of funds. The SBI-led consortium has invited bids to sale the 75 per cent stake of the airline to put the carrier on road of recovery. In which only the Etihad Airways had shown interest.