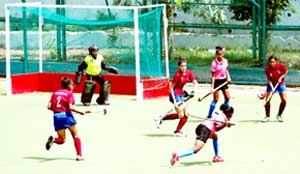 Likewise, the results of the A-Division boys’ category matches are as follows:

As per the schedule, Wednesday, 2nd May 2018 of the championship will be a rest day. So, the quarterfinals will be played on Thursday, 3rd May 2018. Under the girls’ category of the championship, the following matches will be played on Thursday from 6:30 am onwards- Madhya Pradesh Hockey Academy vs Hockey Haryana, Hockey Mizoram vs Uttar Pradesh Hockey, Hockey Orissa vs Hockey Gangpur Orissa and Hockey Jharkhand vs Sports Authority of India (SAI), Likewise, under the boys’ category, Hockey Orissa will play against Madhya Pradesh Hockey Academy at Aishbagh Stadium from 3 pm. The other matches that will be played at Major Dhyanchand Stadium are as follows- Haryana vs Chandigarh from 10:30 am and SAI vs Punjab from 3:30 pm. The last match in the boys’ category will be Uttar Pradesh Hockey vs Hockey Gangpur Orissa that will be played from 4 pm onwards.