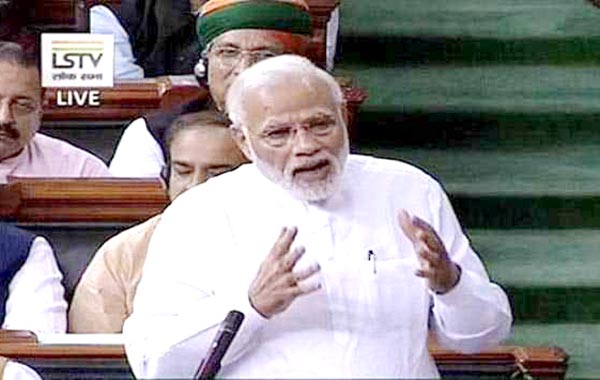 New Delhi, Prime Minister Narendra Modi on Friday took strong exception to the Congress president Rahul Gandhi's remarks of 'Jumla strike' and said such observation amounts to insulting country's armed forces. "You try to insult those who are willingly ready to make sacrifices for the country," Prime Minister said in his spirited reply to the day long debate on No Trust motion against him and said if necessary he would withstand all abuses and curses but nothing should be said to belittle country's soldiers. "Such language is not acceptable. If you have to abuse me, abuse me, I am here. But do not do so with the armed forces," Mr Modi said amid strong objections from the Congress members. "How can you say Jumla to surgical strike. It's insult to the army," he said. Prime Minister maintained that the No Trust Motion was moved by TDP but the attempt was made to "destabilise the government" and that too after a stable regime had come to power with a massive mandate after three decades. "Such strategies are nothing new for Congress. They have done so in the past as well," he said referring to the manner elections were imposed by bringing down Vajpayee government by single vote. In reference to the TDP motion and their grievances, Prime Minister said he has told N Chandrababu Naidu that Andhra Pradesh-based party was actually walking into the trap created by YSR Congress party. During Prime Minister's reply, TDP members rushed to the well of the House and repeatedly raising slogans demanding 'Justice'. Mr Modi, however, said his government would stand firm in its commitment to work for all the states including Andhra Pradesh.