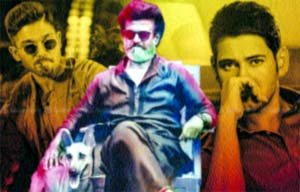 An overdose of the social responsibility Kaala takes over for the people of Dharavi slum has looked pretty exaggerated and bored Telugu audiences. This slow-paced politics centred film might have helped out Rajnikanth’s political ambitions if it is slick and to-the-point. Earlier when Kaala’s release is in place in April, both Bharat Anu Nenu and Naa Peru Surya have moved apart. Finally, the film got released last week and it has created more vacuum by ending up as average farer. That’s is making other small films now queue to theatres big time to cash on it. With the show time of Rangasthalam, Bharat Anu Nenu and Kaala finished, naturally theatres wore that empty look. This week, we have Naa Nuvve and Sammohanam trying their luck and if they could hit the bull’s eye, they will surely rock as there is no competition at all. Later, they will be joined by Taxiwala and Jambalakidi Pamba after a week. And then, Tej I Love You will hit theatres in June last week. So this is a good season for films to prove their mettle, with no biggies around and not much choking at theatres. Almost all these films are carrying similar types of buzz and we have to see who will be encashing at theatres.