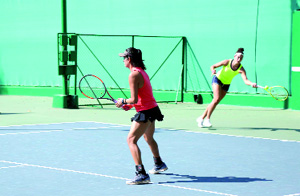 Chronicle Reporter, Bhopal The semi finals of $ 15000 International Tennis Federation (ITF) Women’s Tennis Tournament was played on Friday at Arera Club. Tereza of Slovakia is to face Emily of Great Britain in Singles final. Moreover, Kanika from India and Rosalie will lift the Doubles crown. In the first semi-final Tereza Mohalikova (Slovakia) seeded two took command against the spirited fight of Dhruthi Tatachar Venugopal (India) and made 6-6 and then demolished by 7-2 points in the tie-breaker to take the sets 7-6 points. The second set saw the domination of Tereza broke the serve of Venugopal (India) and won the second set by 6-3 points and moved to the final. The other semi-final between Kanika Vaidya (India) and Emily Webley-Smith (Great Britain) seeded 7 began with Kanika (India) breaking the serve of Emily in the very first game. However, Emily broke back in the very next game to make it 1-1 and ultimately took the set at 6-3. Second set of repeat of first set when Kanika (India) broke the serve of Emily (Great Britain) and lead 1-0 but Emily again broke back and continued her winning spree and took the set at 6-4 and thus set up the final against Tereza (Slovakia). The awaited exciting doubles final met with a tame ending when Ana Veselinovic (Montenegro) and Tereza Mihalikova (Slovakia) conceded the match to Kanika Vaidya (India) and Rosalie Van Der Hoek (Netherlands) after leading 2-1 when Tereza (Slovakia) suffered spasm ailment.