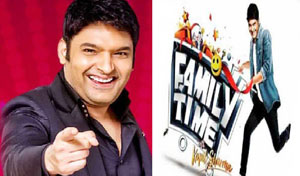 New Delhi, After being away from the small screen for last six months, comedian Kapil Sharma is back on the small screen with his new comedy show 'Family Time with Kapil Sharma'. The show, which began airing on Sony Entertainment Television at 8 pm on Sunday, featured regulars from 'The Kapil Sharma show' like Kiku Sharda, Navjyot Singh Sidhu and Chandan Prabhakar. Besides, it had a new face, Neha Pendse, as the game master for the show.Introducing his show, Mr Sharma said,'it is a game show that wants to get together the entire family and spread laughter.' The show’s format involves families stepping up in a fun face-off against each other and the winner taking home a number of goodies like televisions, washing machines and a bumper prize of a brand new car. Just like 'The Kapil Sharma Show', this one too is all set to see a number of famous Bollywood personalities promoting their films.The first celebrity guest on the show was actor Ajay Devgn, who was there to promote his latest offering 'Raid'.