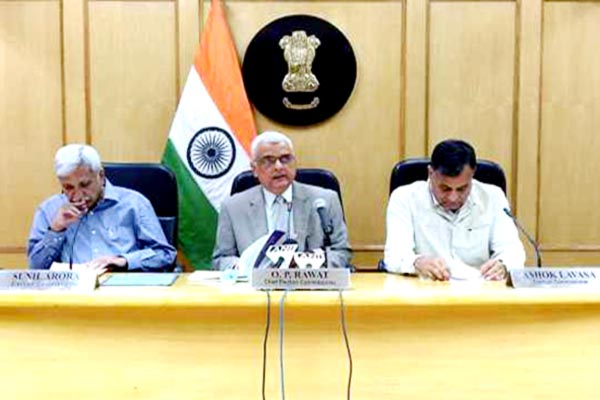 New Delhi, In a crucial political battle for both the Congress and the BJP, the Election Commission on Tuesday announced that Karnataka assembly election will be held on May 12.The result of 224-member assembly will be declared on May 15, said Chief Election Commissioner OP Rawat. The term of the current legislative Assembly ends on May 28. In a briefing to mediapersons here, Mr Rawat said, all the political parties in Karnataka demanded that polls be held in a single phase. After considering their demands and ground realities, the Commission decided to hold the poll on May 12. “Keeping in view climate conditions, academic and exams calendars, major festivals, availability of central police forces, the Commission decided to conduct the polls on May 12”, said Mr Rawat. The notification for poll will be made on April 17 and the last date for filing nomination will be April 24, the Commission said.Scrutiny of nomination papers will be held on April 25 while and the last day for withdrawing nomination will be April 27. Karnataka has 4.96 crore voters and VVPAT will be used in the polls, the Chief Election Commissioner said.He also said that adequate central armed forces will be deployed in the state to hold a free and fair election. Karnataka is facing a tough battle with Congress projecting incumbent Chief Minister Siddaramaiah as its chief ministerial face, the BJP is contesting the election under former Chief Minister BS Yeddyurappa. The third force led by former Prime Minister HD Deve Gowda’s Janata Dal (Secular) in alliance with Mayawati-led BSP. In 2013, the Congress won 122 seats while the BJP and the JD(S) won 40 seats each. A poll ambience is already set in the state with leaders from the Congress and the BJP holding statewide campaigns and addressing rallies. The latest decision by Karnataka government to give a separate religious status to Lingayat community seems to dominate the political undercurrents in this Southern state.