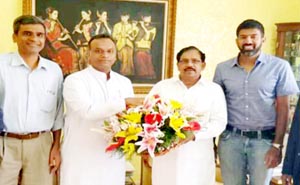 Bengaluru, Karnataka Deputy Chief Minister G Parameshwara today said that the Government is committed to make the State Capital Bengaluru as Sports Capital of the Country. Mr Parameshwara,who also holds the Bangalore Development, Youth Services and Sports portfolio, said that his government is encouraging all Sports. Sufficient funds were sanctioned in the Budget for this purpose, he added. Speaking to newsmen after meeting a delegation of Tennis Association members who called on him on Monday,he said the the government is committed to encourage and promote all types of sports and was also toying with an idea of setting up of a separate University for Sports, he added. He said the government has prepared plan for creation of a Sports Village on the outskirts of the City and sports related equipment manufacturing units. Ace Tennis player Rohan Bopanna, Social Welfare Minister Priyank Kharge, who is also a member of the Association and others formed part of the delegation.