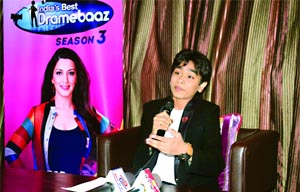 Auditions to take place in Bhopal on 27 April

Chronicle Reporter, Bhopal Following the immense popularity and phenomenal success of the first two seasons of its acting-based talent hunt show for kids - ‘India’s Best Dramebaaz’, Zee TV announces the auditions of its third season. The show is a complete family entertainer with little kids from across the country flooring audiences with their sparkling wit, impressive stage presence, mischievous spirit and above all, unlimited acting talent. Enabling young talent of the country to find their true calling and letting them pursue their passion for acting in order to build an extraordinary future in the world of entertainment, India’s Best Dramebaaz is the true embodiment of Zee TV’s core philosophy Aaj Likhenge Kal. In continuation of nationwide auditions, the show auditions in Bhopal will take place on 27th April 2018. Kids between 5 and 14 years of age are eligible to participate. To encourage the talented kids of Bhopal to come audition for the show’s third season, Kartikey Malviya, who shot to fame as a finalist of India’s Best Dramebaaz Season 2 is in the city today. Hailing from the city of Itarsi, Madhya Pradesh, Dramebaaz, Kartikey Malviya earned the title of ‘Mytho King’ from former judge Sajid Khan, as he left the audience mesmerised throughout the season with his mythological acts. His stints as Karna,Jatayu, Bhagat Singh and a deaf-mute father amongst others were lauded by the judges and established him as a heavy-duty actor on the show! Kartikey Malviya said, “ I am extremely happy to visit Bhopal today. I owe my success to India’s Best Dramebaaz which is the biggest and in fact, the only platform on Indian television for talented children to showcase their acting skills. Being a part of the show has been an amazing journey, it has taught me the real meaning of acting and made me understand the finer nuances of appearing effortless and natural while performing. Needless to say, the show has helped me gain recognition and opened doors to my career in acting. I’m here to encourage the kids of Bhopal to audition for the show’s next season as I am a live example of how India’s Best Dramebaaz can change your life. I request all the talented kids of the city to come forward and enthusiastically participate in the auditions”. So, if you think your child has the ability to win people over with his/her blockbuster performances and has all the makings of a future superstar, head out for India’s Best Dramebaaz Season 3 auditions and give them the opportunity to showcase their talent on national television! India’s Best Dramebaaz Season 3 auditions in Bhopal on Friday, 27th April 2018 will be held at Kopal Public School, Bhopal Barkhedi Kalan, Neelbad Road, Near Bhadbhada Bridge, Bhopal, Madhya Pradesh, 8 AM onwards. Audition gates will open to every young acting enthusiast in the age bracket of 5-14 years. Have a 2 -3-minute act that captures your child’s acting prowess in the best possible manner when you land up for the auditions. So, show us what you’ve got and become the next superstar of the country! India’s Best Dramebaaz will put every Dramebaaz through a series of tasks and challenges that will groom them as actors and test their creativity, spontaneity and acting capabilities. In the coming days, Zee TV’s talent scouts will conduct auditions in various cities including Pune, Jammu, Indore, Guwahati, Varanasi, Ranchi,Lucknow, Patna, Bhopal, Kolkata, Jaipur, Amritsar, Chandigarh, Dehradun. Ahmedabad, Bangalore, Delhi, and Mumbai. So, if acting is your child’s passion and their performances and acts can entertain millions, then join in for the auditions of India’s Next Dramebaaz – Season 3!