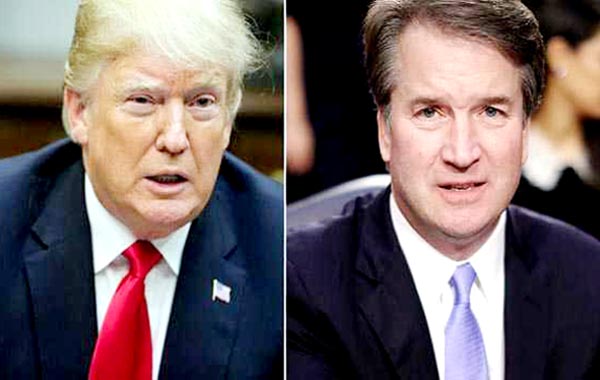 Washington, The FBI has been directed to launch a supplemental probe into sexual assault allegations against Supreme Court nominee Brett Kavanaugh as Republican Senate leaders agreed to allow the bureau to conduct a limited, additional background check of Brett M Kavanaugh. President Donald Trump said in a statement that the updated investigation into his nominee for America’s highest bench “must be limited in scope” and “completed in less than one week”. However, he later suggested in a tweet that it was only a matter of time before Kavanaugh was appointed, The Guardian reported.Senate Republicans voted to advance Kavanaugh’s nomination despite a last-minute change of heart by a Republican senator, who broke ranks and called for an FBI probe into the sexual assault allegations that have roiled the judge’s confirmation process. Moments before the Senate judiciary committee voted 11-10, along strict party lines, to send Kavanaugh’s nomination to the floor for the full chamber’s consideration, Senator Jeff Flake announced he would support a “limited” FBI investigation and threatened to oppose Kavanaugh if there was no further examination of the allegations against him. “I think it would be proper to delay the floor vote for up to and not more than one week in order to let the FBI do an investigation,” Flake said at the hearing on Friday. Following Flake’s insistence, the Senate judiciary committee later said it was formally requesting that the Trump administration instruct the FBI to conduct a supplemental background investigation that would be “limited to current credible allegations against the nominee and must be completed no later than one week from today”. The probe is considered a part of Kavanaugh’s background check because the allegations are from Kavanaugh’s teenage years and the activity does not involve any federal crimes, officials said. That is important because, unlike in a criminal investigation, additional work had to be requested by the White House, which is allowed to impose parameters on the scope, officials said. From the probe of Hillary Clinton’s use of a private email server to the examination of Trump’s presidential campaign, the FBI has grown accustomed in recent months to conducting investigations that are viewed through sharply partisan lenses. The case of Kavanaugh, though, presents significant challenges. The allegations against the Supreme Court nominee are decades old, and his accusers say their memories — sometimes of dates and locations — are hazy. A background check is not like a criminal investigation; investigators would not use tools such as grand juries, subpoenas and search warrants, meaning potential witnesses could simply decline to be interviewed. The FBI will ultimately report its findings — which, in Kavanaugh’s case, will probably be mostly reports of interviews — to the White House. The bureau will not conclude whether the accusers are believable or not, or tell the White House whether it should withdraw Kavanaugh’s nomination. “They’re not going to crack the case,” said Ron Hosko, a former assistant FBI director. “The best they can hope to do is find the facts, relay the statements of the witnesses that presumably would be later tested if Congress chose to do so and the president greenlighted it.” That is not to say an FBI investigation will not yield new information. Witnesses who have provided only brief statements to Congress might be more willing to cooperate with law enforcement. Mark Judge, for example, who is accused of having been in the room when Kavanaugh is alleged to have assaulted Christine Blasey Ford when both were in high school, is willing to answer the bureau’s questions, his attorney said Friday. Judge and others will have a strong incentive to tell the truth. Lying to the FBI is a federal crime. FBI agents are also trained specifically to investigate such matters. Their detailed inquiries will probably reveal answers to questions in a way that partisan congressional hearings cannot. Once the White House gives Congress the FBI’s report, lawmakers might decide to hold a hearing or change their vote. If investigators uncover evidence that Kavanaugh lied to lawmakers during hearings or on his background-check forms, that could spark a criminal investigation in which law enforcement could use the full extent of its legal powers. “Investigations are surprising,” said Chuck Rosenberg, a former U.S. attorney, Drug Enforcement Administration head and FBI official. “I spent most of my life doing them. They take strange turns.” The scope of what the FBI will investigate was not immediately clear. Three women have leveled various allegations against Kavanaugh, all of which he denies. The Senate Judiciary Committee, in a news release indicating it had requested that the administration order a supplemental background investigation, said the probe would be limited to “current credible allegations against the nominee” and that it would be completed “no later than one week from today.” Democrats have for nearly two weeks been calling on the bureau to look into the allegations against Kavanaugh and repeatedly pressed the nominee to support that demand at a hearing Thursday where Ford testified. Until Friday, though, Republicans and the White House had largely resisted those calls. They argued that Kavanaugh, a sitting federal judge, had been background-checked many times and asserted that an FBI investigation would not produce a conclusion on the truth of the allegations he faces.